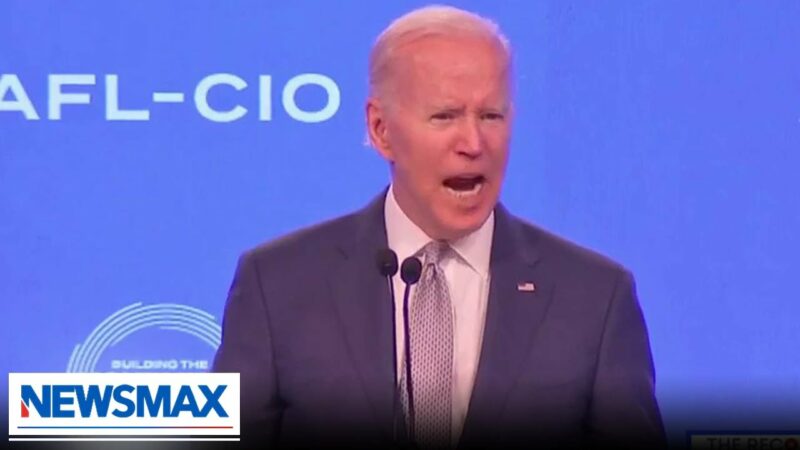 Biden Loses It Over Accusations Of “Reckless Spending”

President Joe Biden screamed, “I don’t want to hear it anymore!” Tuesday over accusations about his “reckless spending” at the 29th AFL-CIO Convention in Philadelphia, Pennsylvania.

Biden attempted to confute Republicans’ claims that he is a “big spender” and contributing to a growing deficit. He claimed the administration will cut the deficit by another $1.6 trillion in one year.

“We have spent a lot of money, let’s compare the facts,” Biden said. “Under my predecessor, the deficit exploded, rising every single year and all the benefits going to the top one percent, basically. Under my plan, last year we cut the deficit $350 billion doing all this … When they come to you and talk about big spenders, let them know there is almost $2 trillion in deficit reduction.”

“I don’t want to hear any more of these lies about reckless spending. We’re changing people’s lives!” he shouted. “And because of the facts this year, we’re delivering the biggest drop in the deficit in the history of the United States of America.”

The president has taken credit for the drop in deficit spending when in reality it has been dramatically reduced by the end of emergency pandemic spending, according to FactCheck.org. Shortly after Biden took office, the Congressional Budget Office (CBO) estimated the deficit to drop by $874 billion in 2021.

However, after Biden passed the American Rescue Plan, the deficit was then expected to drop by $124 billion instead, FactCheck reported. According to the CBO, the legislation is expected to raise the national debt by $3.8 trillion by 2031.

The president also signed the bipartisan $1.2 trillion infrastructure bill into law on Nov. 15, which the CBO estimated would add $256 billion to the nation’s debt over 10 years. He unsuccessfully tried to pass his Build Back Better legislation, which intended to provide a $273 billion tax credit for daycare and early childhood education, a “social safety net” provision that would add a child tax credit and expand Obamacare. The CBO estimated the legislation would add $367 billion to the national deficit.

During Tuesday’s speech, Biden hailed the importance and hard work of union members and recognized that inflation is “sapping the strength of a lot of families” just days after the Consumer Price Index (CPI) rose 8.6% in May, the highest in four decades.

Biden then accused Republicans of blocking his plans to bring down costs for American families.

“The problem is Republicans in Congress are doing everything they can to stop my plans to bring down costs on ordinary families. That’s why my plan is not finished and why the results aren’t finished either,” he said.