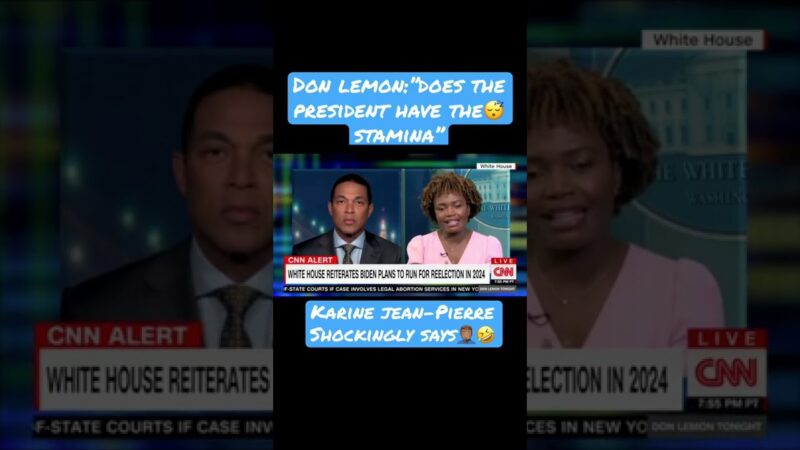 When asked about President Joe Biden’s mental health Monday, White House press secretary Karine Jean-Pierre laughed it off, saying that question should not be asked.

“Does the president have the stamina, physically and mentally, do you think, to continue on, even after 2024?” CNN host Don Lemon asked Jean-Pierre.

“Don! You’re asking me this question? Oh my gosh! He’s the president of the United States. I can’t even keep up with him,” Jean-Pierre responded, laughing.

“That is a question we should not be even asking,” she said. “Just look at the work he does and how he is delivering for the American public.”

Although Carson did not offer a formal diagnosis, he pointed to Biden’s gaffes and reliance on a teleprompter as potential evidence that the president should have a mental check-up.

“Well, certainly you want someone in that office who’s a peak performer, not someone whose staff has to constantly come behind him and clean up what he’s been saying,” Carson said. “Someone who can complete a sentence without a teleprompter would be helpful, as well.”

“I don’t want to make a diagnosis on him, but we really should be in a place as a nation where we’re willing to do mental status tests on our leaders, particularly our president, on an annual basis,” Carson added. “And if they can’t pass that mental status test, action needs to be taken.”

Fifty-three percent of registered voters polled in a recent Harvard-Harris poll said they have doubts about Biden‘s mental fitness, and 62% said Biden is showing he’s too old to be in office.

Nineteen percent of Democrats, 83% of Republicans, and 39% of Independents said they have doubts about his mental abilities in the poll, which was conducted online May 18-19 and surveyed 1,963 registered voters.