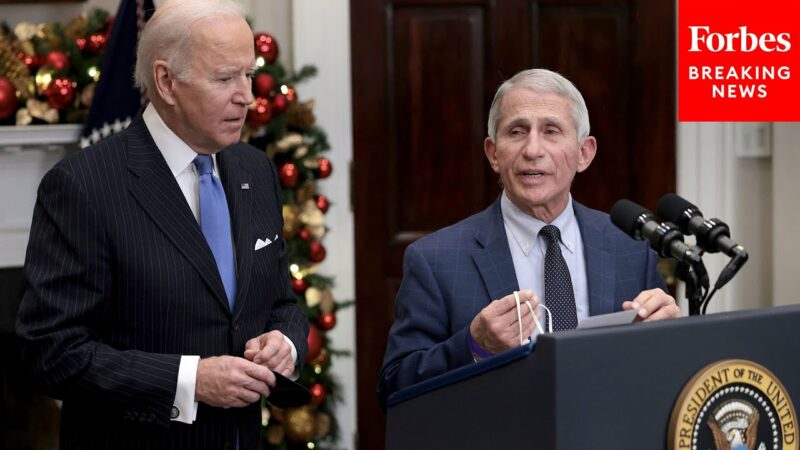 While making his remarks Thursday at the National Institutes of Health (NIH), President Joe Biden said that he often jokes with First Lady Jill Biden that Dr. Anthony Fauci is “the president.”

Biden traveled to the NIH to discuss his plan to combat COVID-19 during the winter, the president began his remarks by citing a previous trip to the NIH in February, praising doctors and researchers for the work they’ve done to “save lives” and “create vaccines” during the pandemic. Biden went on to say that medical professionals have continued giving him medical advice, as new developments pertaining to the virus, namely the Omicron variant, have started to spread across the country.

“I’ve seen more of Dr. Fauci than I have my wife,” Biden joked. “We kid each other, but hey, look who’s president? Fauci. But all kidding aside, I sincerely mean it.”

Fauci, who is the director of the National Institute of Allergy and Infectious Diseases as well as being Biden’s chief medical advisor on COVID-19, has been praised by the media for his work in fighting the pandemic.

Fauci has found himself in the limelight, appearing on the July 2020 cover of InStyle Magazine, he was also profiled in a documentary shown in theaters and on streaming service Disney+ and furthermore was the subject of a children’s book published by Simon & Schuster.

Even though Fauci has been celebrated by some, he has not been very popular among conservatives as the public has grown weary of his ever-changing advice.

Republican Sens. Ted Cruz of Texas and Rand Paul of Kentucky criticized Fauci’s proclamation that he “represents science,” with Paul stating Fauci has “ignored natural immunity” to the virus and Cruz saying Fauci has “exercise[d] authoritarian control over millions of Americans.”

“We kid each other, but hey, look who’s president? Fauci. But all kidding aside, I sincerely mean it.”
What a whack-job! FJB