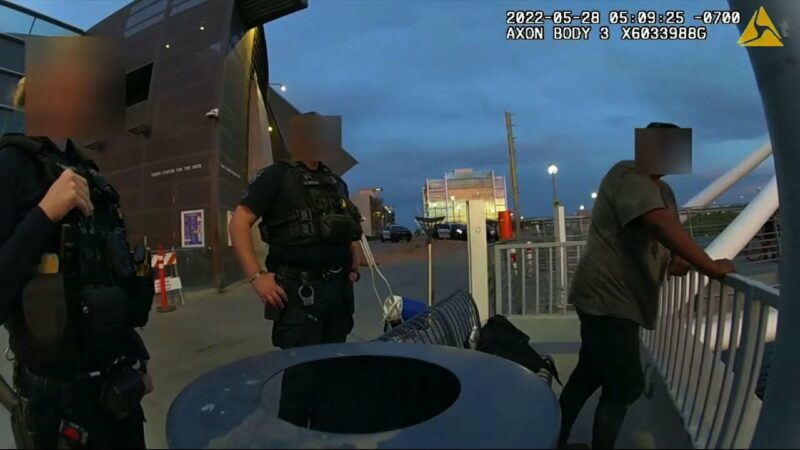 Three police officers in Arizona are on administrative leave after watching a man drown.

On the morning of May 28, officers responded to an “alleged fight” between Bickings and his companion, Susan at the Elmore Pedestrian.

The video shows the three officers approaching the distraught woman, as she explains she is having some “conversating issues” with her husband but he had not been violent.

The officers then approach Bickings, who is also distraught. As the officers attempt to calm him, he suddenly climbs over the four-foot railings, as he tells them he is going for a swim.

Bickings jumped into the water anyway and swam out about 100 feet as the officers watch.

“How far do you think he’s gonna be able to swim?” one officer asked his fellow officer.  One of the officers advises keeping an eye on him just in case he gets out, while he goes to call for a boat.

As the officer filming made his way along the bridge, a bike-mounted officer said, “I’m pretty sure there are turbines at the base of the dam that could suck him under the water.”

This is where the footage cuts off “due to the sensitive nature of the remaining portion of the recording”; Bickings drown minutes later.

Tempe Police Department provided a transcript of what happened.

“So what’s your plan right now?” the officer on the bridge asks Bickings in the water.

“No you’re not,” one officer tells him.

“Go at least go to the pylon and hold on,” the second officer calls down.

“Come back over to the pylon.”

“Okay, I’m not jumping in after you,” the officer tells him.

Bickings’ last words are “Can you hear me?” as he slips beneath the surface of the water.

The transcript indicates the officers then turned their attention to Bickings’ hysterical wife, who is telling them how much she loves him and cannot afford to lose him; the officers repeatedly tell her to calm down and even threaten to put her in the patrol car if she doesn’t.

“Before entering the lake, he had been conversing, unhandcuffed, with the officers, who had responded to a call about an alleged fight between Bickings and his companion,” police said.

“Neither were being detained for any offense. When officers arrived, they spoke to Bickings and his companion, who cooperated fully and denied that

The incident is now under investigation at a state and local level.

The unidentified officers who witnessed the drowning, have been placed on non-disciplinary paid administrative leave pending the investigations, which is standard procedure.

“He was free to go at any time,” the union statement said. “To watch the 11-minute video leading up to Mr. Bickings’ entering Tempe Town Lake and to understand how this 911 call ended is to see an awful loss of life. Our grief mirrors our community’s grief. No one wanted this incident to end as it did.”