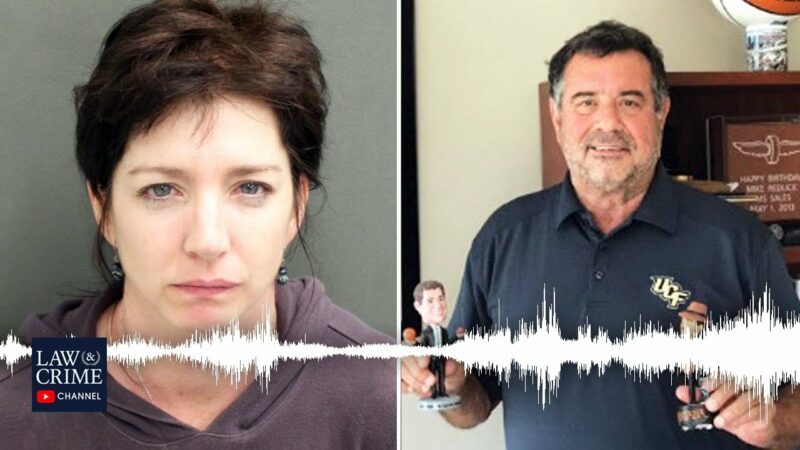 Florida Woman On Trial For Stabbing Of Step-Father Turned Husband

Danielle, 48, sliced her husband up with a kitchen knife, then waited 11 hours before calling 911 — while she perused a dating app.

Neighbors said the couple, who was married for 17 years and had two children, had a “rocky relationship and fought often.”  Michael had even jokingly commented that he would be fine “as long as I hide the steak knives.”

Michael, 65, was a faculty member at the University of Central Florida at the time of his murder.

Michael fell for Danielle after marrying her mother, Kathleen Aquino, to help her get better health insurance. Aquino had breast cancer.

Danielle is on trial in Orange County, Florida, charged with second-degree murder and tampering with evidence related to the stabbing death of her husband in 2019.

One day after killing her husband, Danielle called 911 to report “a tragedy at her home” and said her husband “might have had a heart attack.”

Danielle claimed they fought over text messages she had exchanged with another man.

She said Michael snatched a McDonald’s quarter-pounder she was eating, took a bite, and spat it in her face. She claims she grabbed a kitchen knife to defend herself, and Michael snatched it away from her and stabbed himself. Danielle told the operator that she had barricaded herself in the bathroom.

She said that when she checked on him, he was “out of it,” and she was “slipping on his blood” — but didn’t call the police because she was on probation and was afraid she’d go back to jail.

She was arrested one year prior for drunkenly attacking a pair of sheriff’s deputies and trying to bite one of them.

Danielle attempted to clean up the crime scene. When police arrived, there was a strong smell of bleach, piles of blood-soaked towels, and a bucket of pink liquid.

Two hours before calling the police, Danielle was on the dating app MeetMindful  — “for people who want to live their happiest healthiest lives,” according to the website. She had been reviewing her messages.

Before calling 911, Danielle slit her wrists – but the cut was superficial and was no longer bleeding when officers arrived, according to the affidavit.

Michael had emailed a friend before his murder. “My family is scheduled to move here in December during winter break unless Danielle kills or divorces my a**. Neither is beyond possibility,” he wrote.