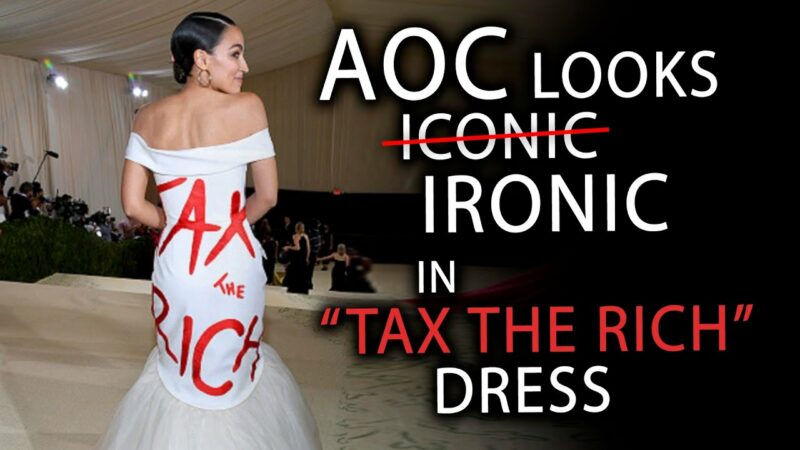 One of the main leaders of the far-left radicalists, Rep. Alexandria Ocasio Cortez had the audacity to defend herself online after she was blasted with for hypocrisy for wearing an emblazoned “Tax the Rich” dress to the Met Gala, where tables could reportedly cost more than $275,000 and individual tickets are priced at around $30,000.

AOC admonished her “haters” about the criticism and maintained that attending the posh dinner with wealthy elites was actually her simply performing her job as a lawmaker in New York City, as she had previously stated.

“And before haters get wild flying off the handle, New York elected officials are routinely invited to and attend the Met due to our responsibilities in overseeing and supporting the city’s cultural institutions for the public,” the representative wrote via Twitter. “I was one of several in attendance in this evening.”

In the same Twitter thread, Ocasio-Cortez rationalized that the “medium is the message” and emphasized that her designer is a “Black woman immigrant designer.”

“Proud to work with @aurorajames as a sustainably focused, Black woman immigrant designer who went from starting her dream @brothervellies at a flea market in Brooklyn to winning the @cfda against all odds – and then work together to kick open the doors at the Met,” she wrote. “The time is now for childcare, healthcare, and climate action for all. Tax the Rich.”

“And yes, BEFORE anybody starts wilding out – NYC elected officials are regularly invited to and attend the Met due to our responsibilities in overseeing our city’s cultural institutions that serve the public. I was one of several in attendance. Dress is borrowed via @brothervellies,” the post continued.

And before haters get wild flying off the handle, New York elected officials are routinely invited to and attend the Met due to our responsibilities in overseeing and supporting the city’s cultural institutions for the public. I was one of several in attendance in this evening.🤗

It is hilarious how far out of touch AOC really is. Here are some of the best highlights that The Daily Wire outlined from her critics:

Ej Dickson, the senior writer at Rolling Stone, posted: “Am I the only one who thinks this is really f***ing stupid[?] 1) The dress is ugly, 2) She’s at a $35k per person event and this isn’t nearly the own she thinks it is. 3) The dress is ugly. I mean I love her but come on this is so dumb. Peak girl boss s**t.”

“I’m not even mad at the lack of self-awareness or hypocrisy anymore. At this point it’s just hilarious. These people are a giant joke,” Rep. Dan Crenshaw (R-TX) tweeted.

“What makes @AOC a bigger fraud: The ‘tax the rich’ dress while she’s hanging out with a bunch of wealthy leftwing elites or the lack of masks after spending the past 18 months as one of the biggest authoritarian mask Karens in the country?” highlighted Donald Trump Jr.

“Meanwhile our kids are muzzled & six feet apart all day long while trying to learn but she & these other ‘Rules for Thee but Not for Me’ pols can parade around maskless & in top of each other at the Met Gala bc, SCIENCE,” she added.