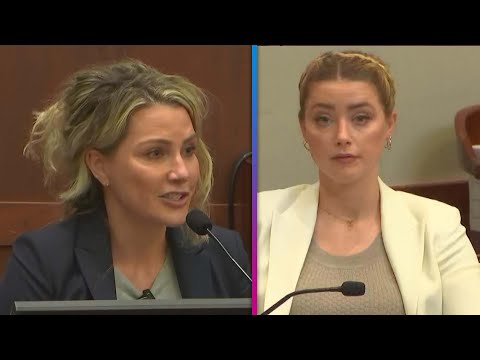 Actress Amber Heard, 36,  fired her PR team and switched to a new firm after an expert witness in the defamation trial between her and ex-husband Johnny Depp testified that she was diagnosed with two personality disorders.

Heard was reported to have cut ties with her publicists ahead of this week’s proceedings, after days of bad press following shocking court testimony last week.

Both conditions are characterized by instability in relationships and being overly dramatic, manipulative, and image-obsessed.

Taking the stand last Thursday, Dr. Curry testified that Heard’s BPD and instability was driven ‘by this underlying terror of abandonment.’

The Dr also explained people with BPD could resort to ‘very extreme behaviors as they make desperate attempts to prevent abandonment.

A communications expert following the trial said “’As I understand it, Dr. Curry’s testimony was the final straw.

‘Depp’s team aren’t just painting Heard as hitting him back – they are painting her as crazy.

‘That was too much for her and she fired her PRs,’ he added.

She apparently made the move in hopes that she might receive more favorable coverage this week – when she is expected to take to the stand and testify.

‘She doesn’t like bad headlines,’ an unnamed source said.

Another source said the actress is ‘frustrated with her story not being told effectively.”

Fans have come to Depp’s defense after hearing his testimony last week, with a petition calling for Heard to be cut from the upcoming superhero film Aquaman 2 reaching three million signatures Monday.

Supporters of the actor are pleading with filmmakers DC and Warner Bros to cut the actress from the sequel following the shocking domestic abuse allegations that have come out in court over the last few weeks.