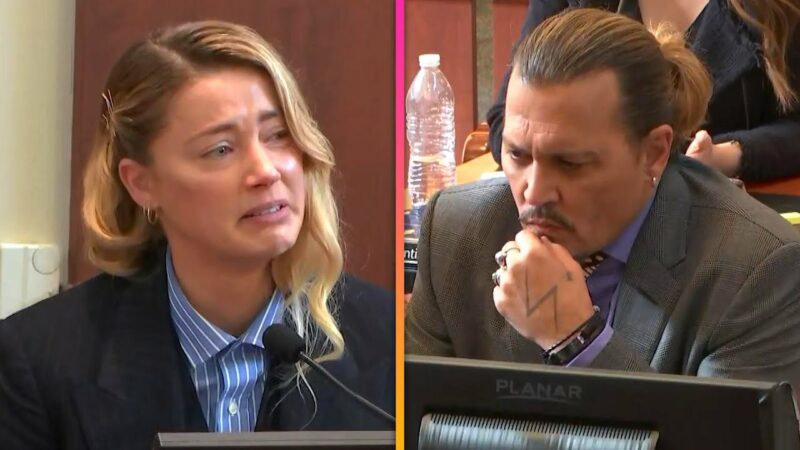 Amber Heard took the stand in a Virginia courtroom Thursday where she detailed disturbing sexual assault allegations against her ex-husband, Johnny Depp,

Heard described an alleged sexual assault that took place over the course of a three-day-long fight between the couple in Australia in 2015. Heard claimed that when she rejoined her husband in Australia after not seeing him since their wedding, Depp accused her of cheating on him with her co-star Eddie Redmayne.

The actress broke down in tears during her testimony, saying at one point, “I don’t want to do this.”

Heard told jurors that Depp tore off her nightgown and dragged her naked across shards of broken glass, and repeatedly punched her. The next thing she said remembered was being bent over on the bar with her chest up and something inside her.

“I didn’t know if the bottle he had inside me was broken,” she said, recalling that she thought, “‘Please God, I hope it’s not broken'” at the time.

She said that afterward she went to the bathroom, vomited then took two sleeping pills. When she awoke, Depp was writing on the walls with blood from his finger that was allegedly injured after Heard through a bottle of alcohol at him.

Heard’s lawyer, Elaine Bredehoft, asked her what Depp was saying to her during the alleged sexual assault.

“‘I’ll f–king kill you.’ He said it to me over and over again,” Heard told jurors.

During the infamous fight that left Johnny Depp missing a piece of his finger, she claims that he threatened to carve up Heard’s face.

“He’s got a bottle in his hand and he threw it at me,” she said. “At some point, he had a broken bottle up against my face, neck area, my jawline, and he told me he’d carve up my face.

A spokesperson for Depp said Heard “did indeed deliver ‘the performance of her life in her direct examination” in a Thursday statement.

“While Ms. Heard’s stories have continued to grow new and convenient details, Mr. Depp’s recollections have remained exactly the same throughout the six painful years since her first allegations were made,” the spokesperson said. “His truth — the truth — is the same no matter the environment in which it is has been presented. The upcoming cross-examination from Mr. Depp’s team will be most telling, and will certainly highlight the many fallacies Ms. Heard has now attempted to pass off as fact throughout her convoluted testimony.”

Depp, 58, is suing Heard for $50 million over a 2018 op-ed she wrote alleging she was a victim of domestic violence. The “Pirates of the Caribbean” actor claims the abuse allegations were an elaborate “hoax” to promote her film “Aquaman” and punish him for leaving her. Heard countersued Depp for $100 million, accusing him and his former lawyer of conspiring to destroy her reputation in a series of smear campaigns.