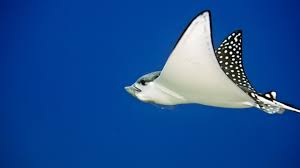 When an Alabama family set out for the 2022 Alabama Deep Sea Fishing Rodeo, they certainly didn’t expect to see a rarely spotted eagle ray.

April Jones and her family were fishing off the waters of the Sand Island Lighthouse on Friday, and a 400-pound ray jumped out of the water and into their boat. “We were participating in the Alabama Deep Sea Fishing Rodeo. Jones said. “We were out fishing off the coast of the Sand Island Lighthouse on Friday and I wasn’t catching anything — but my husband, husband’s father, and son all were.”

“We were trying to get a fish for me to catch so I told them I was ready to leave and head to a different spot. We packed everything up — and as we were pulling away, there was a hard hit and a water splash,” she said.

“I felt something hit me,” she added, “and then I see this big blob flopping around in the back of the boat.”

“We made some calls” for help, she said, to try getting it out — “but she was so heavy that she was also weighing the boat down, and we were getting water in the back of the boat.”

“We made the decision to get back to shore.”

Jones said her family “just wanted to make sure she was kept alive, so we were dumping water on her and it was about a 15- or 20-minute boat ride back to shore.”

“We drove to the closest boat launch, which happened to be where the Dauphin Island Sea Lab was,” Jones added. “I ran into the lab to see if anyone could help get her out. In the meantime, some people had come to the boat and helped her get out.”

It was only then, she noted, “that we found out she had delivered four babies. We had no idea when she did it. They were not moving.” Jones said that when staff from the Sea Lab saw them, they determined “they were not alive — so we donated them to the Sea Lab. They said they would use them to show kids and tell the story about [the] mom — and how rare it was to see an eagle ray.”

“What we learned from the lab about stingrays,” added Jones, “is if they are in any type of stressful situation, they will give birth.”