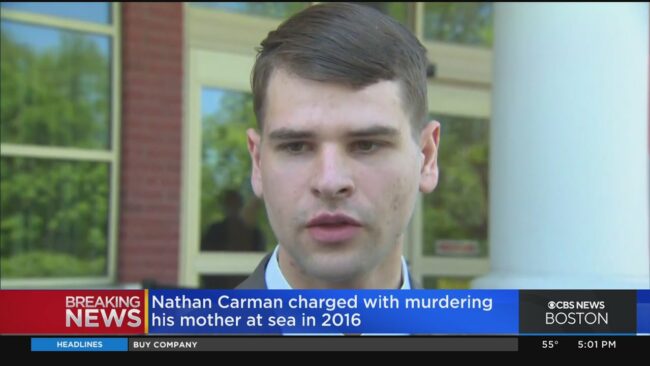 A New England man who was rescued from a life raft off the Rhode Island coast after he and his mother set off on a fishing trip in 2016 has been charged with her murder on the high seas nearly six years later.

Nathan Carman, 28, of Vernon, Vermont, had previously been suspected of shooting and killing his grandfather John Chakalos while the 87-year-old man was asleep at home in Windsor, Connecticut, in December 2013.

According to the new indictment, Carman killed his mother, 54-year-old Linda Carman, in 2016 as part of a scheme to obtain millions of dollars of inheritance money from his grandfather’s estate and related family trusts.

A Chinese freighter picked Carman up in a life raft about 100 nautical miles south of Martha’s Vineyard, on Sept. 25, 2016.

He claimed he and his mother had set off from a Rhode Island marina on their fishing boat, the Chicken Pox, about a week prior when the 31-foot vessel began taking on water near Block Canyon, off Montauk Point, New York, in the Atlantic Ocean. Carman claimed his mother mysteriously vanished while he swam for the life raft.

The U.S. Coast Guard transported Carman back to their base in Boston, Massachusetts. His mother’s body has never been recovered but she is presumed dead. Federal prosecutors now say Carman sank the boat, furthermore, witnesses have testified that he made faulty repairs before the voyage, removing two stabilizing trim tabs from the stern, near the vessel’s waterline, leaving holes that he tried to seal with an epoxy stick.

Carman was arrested at his home in Vernon on Tuesday and is expected to be arraigned before Chief U.S. District Judge Geoffrey W. Crawford on Wednesday.

The eight-count indictment charges him with his mother’s murder on the high seas and related frauds to obtain family and insurance funds, including defrauding the company that insured his fishing boat, the U.S. Attorney’s Office for the District of Vermont announced on Tuesday. Though the indictment says he also murdered his grandfather, Carman has not been charged with that killing.

If convicted of murder, Carman faces mandatory life imprisonment, prosecutors said. The fraud charges each carry a potential penalty of up to 30 years.