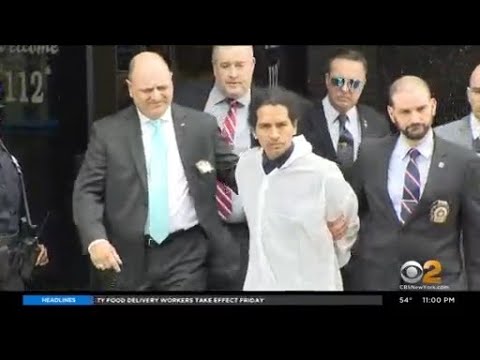 The killer of married New York City mother Orsolya Gaal-51 told police that she had infected him with HIV and that’s why he’d gone to her house the morning of her murder.

“She was cheating on me with somebody, and she gave me HIV,” David Bonola told Detective John Petzolt in a confession five days after the April 16, murder in the basement of her upscale Forest Hills home.

Bonola, 44, pleaded not guilty Tuesday in Queens Supreme Court to a 13-count indictment – including charges of murder, burglary and concealment of a human corpse.

According to prosecutors, Bonola, who worked as the family’s handyman, slashed Gaal’s throat and stabbed her more than 50 times in the basement of her home after she broke off their two-year affair. Her 13-year-old son was asleep in an upstairs bedroom, while her husband and 17-year-old son were out of town visiting colleges.

“She lied to me, and she used me,” Bonola told the detective. “She told me that she loved me, but that she couldn’t be with one person. She took a phone call from another guy, and she said she was going to see him. That made me angry. I couldn’t accept it. Then, I saw her with Carlos, another guy.”

Bonola, a Mexican national who has been in the country illegally for more than 20 years, said that he surprised Gaal at her home sometime between midnight and 4 a.m. April 16 and accused her of giving him HIV.

Bonola claimed that Gaal grabbed a knife and threatened to kill him if he didn’t get out of her house.

“She kept saying I hate you and stabbed me in the left hand,” he told police about his wound. “I grabbed the knife and cut her in the neck.”

“She kept moving, so I stabbed her,” he said in a second confession given to Assistant District Attorney Peter McCormack on April 20, repeating many of the horrifying details. “I noticed there was a lot of blood coming out of her neck and I noticed she stopped breathing.”

The deranged handyman said he used towels to try to clean up the blood that was on the floors and walls, then stuffed her body into one of her son’s duffel bags with wheels. “I didn’t want her kids to find her,” he said.

Surveillance video shows Bonola wheeling the bag toward Forest Park, where he left Gaal’s mutilated corpse in the blood-soaked duffel bag. Later that day, a dog walker happened upon the remains, and police followed the trail of blood back to the crime scene.

After the murder, Bonola left a bizarre message for Gaal’s husband.

“I wanted to call and say sorry for what happened,” Bonola said, according to the statement in court papers. “I was having an intimate relationship with Orsolya, we have been intimate many times, one time was at your house. She had a few other lovers. I did not do this. I will go to the police precinct to talk to them.”

Bonola told authorities that he’d stolen Gaal’s laptop and cellphone and threw them in the Hudson River “near a place where we were supposed to get together for our anniversary.”

Queens District Attorney Melinda Katz said in a statement. Bonola, who turned himself in, is being held without bail.