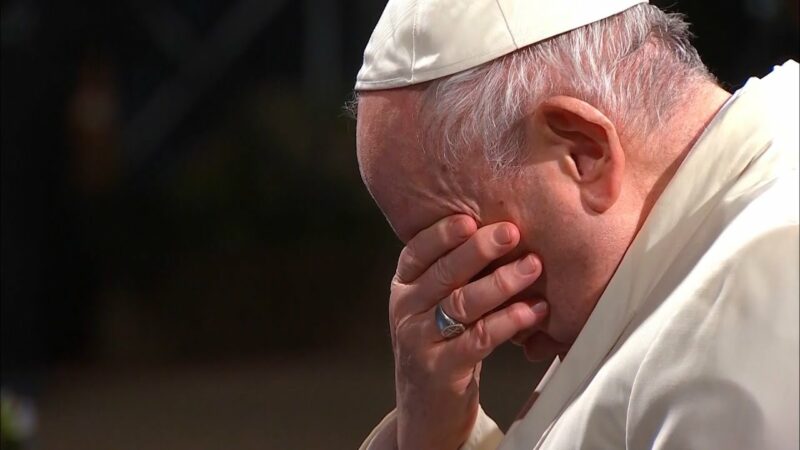 Woke Pope Declares “We Are Racist”

Pope Francis claimed that there is prejudice toward certain groups of refugees because “we are racists” during a Good Friday interview.

Italian-based reporter Lorena Bianchetti asked the Pope if refugees will be “subdivided into the category of being an annoyance” and whether there will be prejudice toward those that come from certain parts of the world. Francis compared today’s refugees to Saint Joseph, Mary, and an infant Jesus, who fled Bethlehem and sought refuge in Egypt to escape King Herod who was plotting to kill the child.

“It is true. Refugees are subdivided,” Francis said. “There’s first class, second class, skin color, if they come from a developed country or one that is not developed. We are racists, we are racists. And this is bad. The problem of the refugees is a problem that Jesus suffered too because he was a migrant and a refugee in Egypt when he was a child, to escape death. How many of them are suffering to escape death!”

“But Saint Joseph does not have a beard, no,” he continued. “He is Syrian, from today, with a baby, who is fleeing the war today … On the cross, there are people from the countries of Africa at war, of the Middle East at war, of Latin America at war, of Asia at war. Several years ago I said that we are living a third world war in pieces. But we have not learned.”

The Holy Father said that Jesus is “in agony” over the wars that have devastated many parts of the world, including Syria, Yemen and Ukraine.“One writer said, ‘Jesus Christ is in agony until the end of the world’. He is in agony in his children, in his brothers and sisters, above all in the poor, in the marginalized, and in the poor people who cannot defend themselves. At this moment in Europe, this war is really affecting us. But let’s look a little further. The world is at war, the world is at war!”

The pope emphasized that people around the world are part of “one single family” in a 2021 message for the World Day for Migrants and Refugees.

“No matter where you are and why you are there, every baptized person is a full member of the local Church community, a member of the one Church, an inhabitant of a single home, part of one single-family,” he said.

Francis has implored the U.S. and other world powers to open their doors to more refugees, saying in 2015 that “we must not be taken aback by their numbers, but rather view them as persons, seeing their faces and listening to their stories, trying to respond as best we can to their situation.”