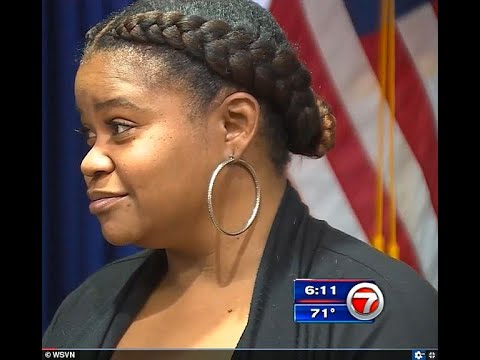 WATCH Woman Fights For Her Life When Something Truly Unexpected Happens

Police gave an award to a 9-year-old Florida girl who fought off a robber to protect her mother – and the entire incident was caught on video. Journee Nelson and her mother were shopping for groceries at Sabor Tropical Supermarket in West Palm Beach on Nov. 2 when the suspect tried to steal her mom’s purse.

“We walked out the store and then I took a little glance at him and then I looked back at the car and then I opened my door. And then, next thing I know, I saw him running towards my mom.”

Police say while Journee’s mother was loading groceries into her car, the suspect ‘rushed up on her’ and began to violently pull at her purse before knocking her down. The would-be robber told the mother to let go of your purse or “you’re going to make me pop you” while reaching for his waistband.

Her mother, Danielle Mobley, said she struggled with the thief.

“We struggled over the purse. He pushed me down to the ground,” said Ms Mobley.

Without even thinking, Journee started hitting the attacker in the face before he pushed her down and took off running.

“That is when I let it go and figured he would take off,” Ms Mobley said. “I wasn’t expecting her to take off after him.”

The nine-year-old chased the man for five blocks but failed to catch him. He was arrested two days after the attack. On Thursday, West Palm Beach Police chief Frank Adderley gave Journee a medal and a certificate for her heroism.

“I bet he was shocked when she hit him right in the face because he definitely could tell on the video that he was not expecting that, and her actions were perfect timing in this particular situation.”