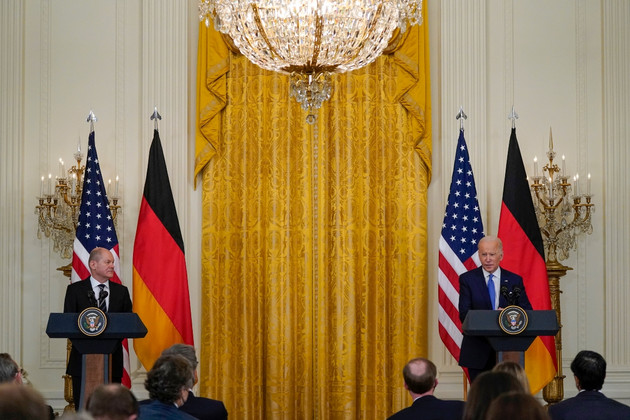 U.S. And Germany At Odds Over Nord Stream 2 Pipeline

President Joe Biden and German Chancellor Olaf Scholz on Monday delivered remarks as Biden describe the U.S.-Germany relationship to be one of “close” friendship and a “reliable” partnership.

But while the two leaders vowed on Monday to respond in unity to a potential Russian invasion of Ukraine, Biden and Scholz seemed to be at odds about the Russia-to-Germany Nord Stream 2 pipeline — which wasn’t mentioned in either of the leaders’ opening remarks. When taking questions from reporters, Biden adamantly reiterated his pledge to shut down the pipeline should Russia invade, but Scholz refused to comment on the pipeline.

When Scholz was repeatedly questioned about whether he was committing to stopping the pipeline if Russian troops advanced, he kept his answer vague.

“We will act together,” Scholz said, echoing Biden’s message on unity. “We will not be taking different steps. And they will be very, very hard to Russia.”

The German leader, who took over from Angela Merkel last December, has been more reluctant than other Western allies when it comes to what sanctions Russia would be hit with if Putin moves forward with an invasion, including a commitment to shutting down the pipeline. Germany has also refused to deliver weapons to Ukraine silencing critics who have accused Berlin of not playing an active enough role in supporting Kyiv.

Nord Stream 2 has been a thorn in Biden’s side — just as it has been for previous U.S. presidents — as Washington fears the pipeline will increase Europe’s dependency on Russia, already the source of most of the natural gas fueling Europe.

During the joint news conference, Biden said the two leaders had agreed on a “strong package of sanctions,” though he did not elaborate on what they might be.

Both Scholz and Biden addressed Russia’s looming threat to Ukraine during Monday’s press conference, with Biden ultimately telling Americans it would be “wise” to leave Ukraine. Scholz’s visit comes as Biden administration officials warn that Russia has assembled 70 percent of the troops needed to launch a full-scale invasion of Ukraine and as Biden works to present a united NATO response to the crisis.

“I think it would be wise to leave the country. I don’t mean — not talking about our diplomatic corps. I’m talking about Americans who are there,” Biden said. “I hate to see them get caught in a crossfire if, in fact, they did invade.”

Scholz, who has said little of the increasing threat, offered a clear answer on his level of concern.

“It is clear that there is a military threat to Ukraine,” the chancellor said. “This cannot be kept silent and it is obvious. We see how many Russian troops are deployed along the Ukrainian border, and this is a serious threat to security in Europe.”

The German leader said his country was working with its NATO allies, the European Union, and the U.S. on a response to Russia. “Our strict response is saying it will have very high prices if they intervene and that we work very hard to get a way out of this situation,” Scholz said.

Biden came to Scholz’s defense during Monday’s news conference, answering a question directed at the German chancellor. A reporter called out Scholz’s reluctance to confirm his plans for Nord Stream 2, noting that transparency might “win back trust” as a strong ally to the U.S.

“There is no need to win back trust. He has the complete trust of the United States,” Biden said. “Germany is one of our most important allies in the world. There is no doubt about Germany’s partnership with the United States. None. With regard to helping Ukraine, one of the largest contributors financially to Ukraine has been Germany. Germany has been in the forefront of making sure, providing economic assistance. But in terms of the U.S. media saying Germany is not reliable, Germany is completely reliable.”

The German chancellor is scheduled to visit Ukraine next week before he makes the trip to Moscow for a meeting with Putin. Scholz said that during his meeting in Moscow, he would warn Putin that Russia would pay “a very high price” if he moved troops into Ukraine.

LOL.. Biden’s a fuckup. We were an exporter of oil. Germany didn’t need Russia. Killer Joe fucked that up. .Joe’s make Russia rich agenda. If you remember, Trump had blocked that pipeline.