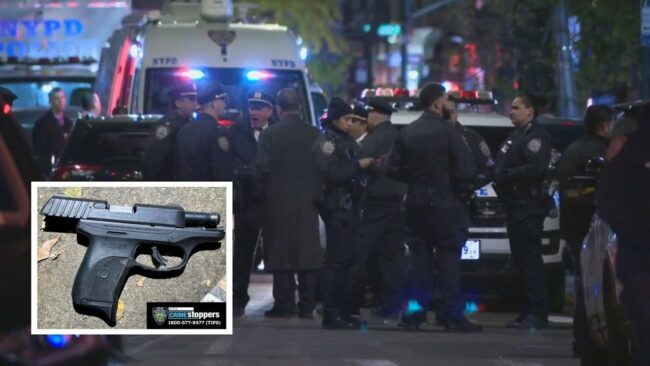 Two New York City police officers were shot by a “career criminal” suspect Wednesday in the Bronx, and Mayor Bill de Blasio blames it on there being “too many guns out there.”

“It’s another example of a gun from out of state, comes into our city, hurts a New Yorker,” de Blasio said. “This is something we’ve got to deal with in a whole different way. But in the meantime, thank God that there is one more shooter off the streets because of the bravery of these just absolutely extraordinary officers.”

The mayor also recognized that the officers showed “incredible bravery” and that he was thankful for them and for the fact that they are recovering from their injuries.

Commissioner Dermot Shea said the shooting was carried out by a “career criminal with far too many arrests, still on the streets of New York City.

“What we know about this firearm is that it was reported stolen last year in Georgia. Obviously made its way, as far too many guns do, up into New York City and it’s causing carnage on the streets,” Shea added.

Patrick Lynch, president of the Police Benevolent Association, agreed at the press conference that there are too many guns on the streets of New York but said the problem is that criminals are not afraid to carry firearms.

Shea said the community acted quickly Wednesday night by calling 911 in response to the shooting and added: “It’s time for the rest of the system to do its job and make the streets as safe as they can be.”

One of the officers, a female who has been on the force for about a year, was shot twice in the upper right arm and is expected to recover. The officer returned fire and shot the suspect.

Her partner, a male with eight years on the force, was shot in the armpit and is also expected to recover.

The unidentified suspect has shot a total of three times and is at St. Barnabas Hospital where his condition was upgraded to serious from critical, according to an NYPD detective just after 2 a.m. Thanksgiving morning.

The manager of 7 Days & Nights Deli on 187th Street, Malik Alsaedi, heard the gunshots around 8 p.m. on Wednesday and called 911.

The shooting comes exactly one year after two NYPD officers were shot and injured in an ambush attack when responding to a domestic violence report in Queens.

de Blasio is a moron.

Blame the gun well then DeBlasio is fairgame.

Just keep letting them out of jail.

what a douche…you can blame the freaking criminals that break your laws every single day…you must find the “root” cause…I will give you a hint, look at criminals carrying the guns, what a freaking flake

Can’t wait till they come for de blasio and there’s no cops to save his azz . But remember it’s the gun not the home grown terrorists like blm or antifa . You can’t make this stupid crap up , delusional democrats like de blasio really are that stupid

wpDiscuz
6
0
Would love your thoughts, please comment.x
()
x
| Reply
Send this to a friend