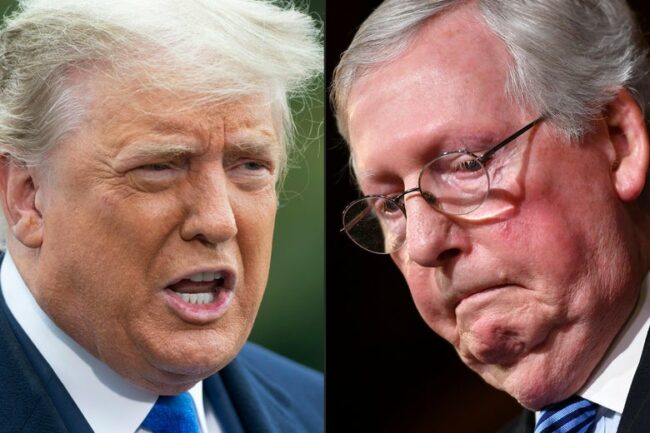 Trump Slams McConnell “He Does Not Speak For The Republican Party”

McConnell on Tuesday again condemned the Jan. 6, 2021 attack at the Capitol, and criticized the RNC for its censure of Reps. Liz Cheney, R-Wyo., and Adam Kinzinger, R-Ill. both of whom are anti-Trump politicians on the Jan. 6 select committee.

“Mitch McConnell does not speak for the Republican Party, and does not represent the views of the vast majority of its voters,” Trump said in a statement released by his Save America joint fundraising committee.

“He did nothing to fight for his constituents and stop the most fraudulent election in American history. And he does nothing to stop the lawless Biden Administration, the invasion of our borders, rising inflation, unconstitutional mandates, the persecution of political opponents, fact-finding on the incompetent, Afghanistan withdrawal, the giving away our energy independence, etc., which is all because of the fraudulent election. Instead, he bails out the Radical Left and the RINOs.”

Trump’s reproach toward McConnell largely stems from the leader congratulating President Joe Biden on winning the 2020 election — a win Trump claims was the result of voter fraud in several key swing states — and blaming the former president for “provoking” the Jan. 6 attack on the Capitol.

“If Mitch would have fought for the election, like the Democrats would have if in the same position,” Trump said in his latest statement, “we would not be discussing any of the above today, and our Country would be STRONG and PROUD instead of weak and embarrassed.”

Trump refrained from using the “Old Crow” moniker regarding McConnell as he has in the past.

McConnell on Tuesday night downplayed the fact that Trump has often referred to him as the “Old Crow.”

“It’s my favorite bourbon,” McConnell joked referring to a Kentucky spirit of the same name.

McConnell has said he’s focused on ensuring that the GOP regains control of the Senate in November — not on Trump’s verbal assaults.

“As a political matter, as a strategic matter, it makes little sense to go down this rabbit hole … He’s far too disciplined to allow himself to be distracted,” former McConnell campaign adviser Scott Jennings said.

China Bitch should have been replaced long ago. He is a TRUE RINO.