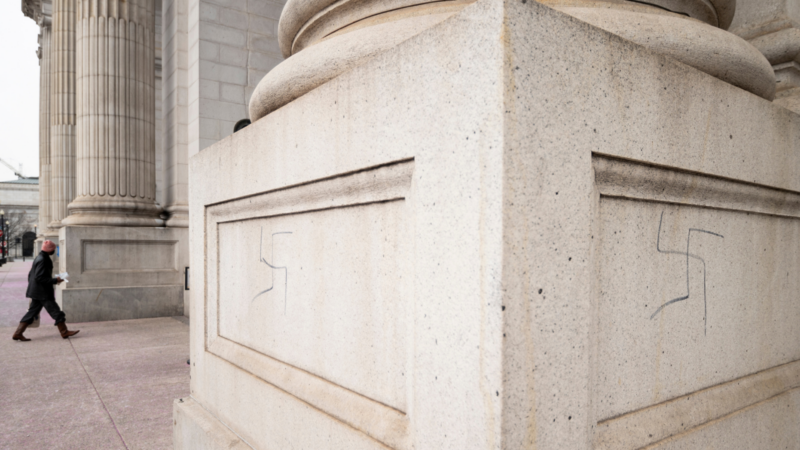 Immigration and Customs Enforcement (ICE) said it will not take action to deport an illegal immigrant who has previously been deported on four occasions even though he has recently drawn swastikas in Washington D.C.’s Union Station with the agency citing the capital’s “sanctuary city” policies.

Geraldo Pando, a Mexican national, was arrested last month for vandalism after drawing the Nazi symbols the day after International Holocaust Remembrance Day. The incident is being investigated as a possible “hate crime.”

ICE said it has not issued a detainer — a request that ICE would be informed of an illegal immigrant’s pending release from custody, so they can be moved into deportation proceedings. The spokesperson cited D.C.’s status as a “non-cooperative jurisdiction,” typically referred to as a “sanctuary city.”

“ICE has not issued a detainer on Pando because the District of Columbia is a non-cooperative jurisdiction and the Washington D.C. jail is barred from honoring ICE detainers due to a federal District Court ruling, and city ordinance,” an ICE spokesperson said.

This incident serves as the latest example of how ICE has been limited by a combination of Biden administration policies and “sanctuary city” policies at the state and local level, seeking to protect illegal immigrants from federal immigration law.

While the administration has taken significant criticism for restricting ICE, Homeland Security Secretary Alejandro Mayorkas has defended the policies, including the policy stating that someone’s illegal status is not grounds for enforcement action.

“We have fundamentally changed immigration enforcement in the interior,” Mayorkas said in an interview in January.

This is what happens when the Democrats are in control.

Well there’s a dictator in the WH. So what do you expect.