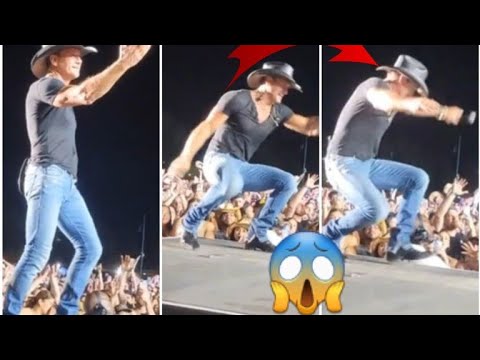 Tim McGraw’s Arizona fans held their breath when he took a nasty spill off the stage Saturday night.

The country superstar was performing his hit song “I Like It, I Love It” in Tempe when he lost his balance at the edge of the stage.

McGraw kneeled down to strike a pose, lost his balance and fell backward into the crowd. Thankfully security was there to adjust his fall so McGraw landed unscathed on the lawn.

The country music legend shook it off with a smile and used the opportunity to greet fans at the barricades.

McGraw’s onstage accident comes on the heals of fellow musician Post Malone’s who also had a bad fall after stepping in a hole during his recent show in Missouri.

Malone didn’t fair as well as McGraw, as he hit his rib cage when he went down and required medical attention. Malone did power through and returned to finish a shortened version of the show.