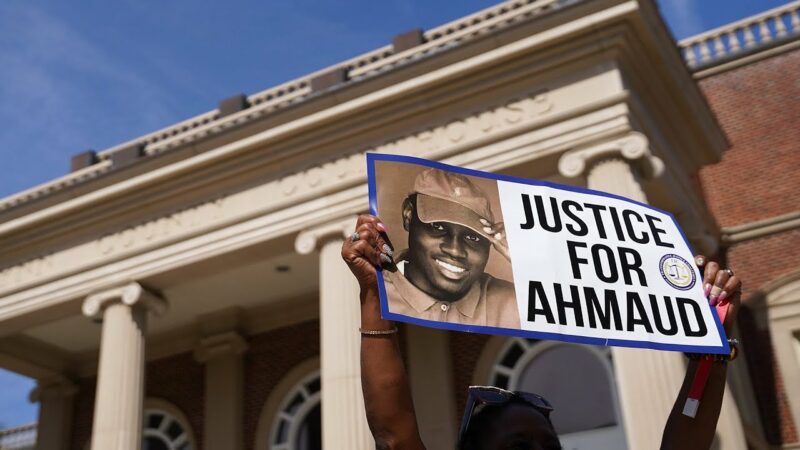 The three white men convicted of murdering Ahmaud Arbery were sentenced Friday to life in prison, with no chance of parole for the father and son who armed themselves then went on the deadly pursuit of the Black man in February 2020.

All three men were convicted of murder and other charges by a Glynn County jury in November in the hunting and fatal shooting of Arbery on Feb. 23, 2020, resulting in mandatory life sentences.

Walmsley described Arbery’s killing as “callous” and said that”confrontation was being sought,” by the three men.

Before announcing the sentences, the judge asked the courtroom to sit in silence for one minute to show, he said, a fraction of the time Arbery was running in terror from these men before they killed him.

“He left his home to go for a run and ended up running for his life,” Walmsley said.

The sentences are in line with the request from prosecutor Linda Dunikoski, who recommended that Bryan, 52, get a chance at parole and that the McMichaels be denied that possibility. Dunikoski said the father and son showed no remorse or empathy for “the trapped and terrified Ahmaud Arbery.”

“There were so many opportunities to stop, to think,” she said. “And here’s the real problem: Greg McMichael was former law enforcement” and Travis McMichael had served in the Coast Guard.

“So here we have some men who should have known better,” she told the judge Friday morning. “Vigilantism always goes wrong.”

Defense attorneys argued in favor of parole for all three men.

Gregory McMichael’s attorney, Laura Hogue, asked the judge to consider that it was not his intention for Arbery to die.

Bryan’s attorney said his client was “in a different position” because he showed remorse and cooperated with police by turning over the cellphone video of the shooting.

“Mr. Bryan isn’t the one who brought a gun,” Kevin Gough said. “He was unarmed. And I think that reflects his intentions.”

Arbery’s parents and sister all spoke before the sentences were handed down and asked the judge to show no lenience.

“The man who killed my son has sat in this courtroom every single day next to his father. I’ll never get that chance to sit next to my son ever again. Not at a general table. Not at a holiday. And not at a wedding,” Arbery’s father, Marcus Arbery, said, “His killers should spend the rest of their lives thinking about what they did and what they took from us and they should do it behind bars because me and my family have to do it for the rest of their life.”

The McMichaels armed themselves and chased Arbery down in a pickup truck after seeing him running in their neighborhood, Satilla Shores. Bryan joined the chase in his pickup truck and recorded video of the fatal shooting on his cellphone. Prosecutors said Arbery ran from the men for five minutes before being trapped between the two pickup trucks and ended up in a confrontation with an armed Travis McMichael.

Walmsley said the portion of the video that shows Travis McMichael lifting his shotgun to fire at Arbery from 20 to 30 yards away was “absolutely chilling.”

“And you watch that with context after hearing the evidence in this case, again, thinking about a young man who had been running at that point for almost five minutes,” Walmsley said. “And it is a chilling, truly disturbing scene.”

In explaining his sentencing decision, Walmsley said he was also guided by “the defendants’ own words” after the shooting.

The judge said Travis McMichael talked about concern for his own well-being while Arbery lay dying in the street.

Funny how you didn’t see one sign saying a damn thing for the young black girl killed by the blm when they shot up her dad’s car as they stopped traffic . Even tho they cried … black life’s matter … they kill blacks . Blacks kill more blacks then all the other races put together . Yet they cry blm … go figure … iam not saying killing is OK . No one has that right , unless it’s in self defense . But kill my daughter and I will hunt you down and it won’t end in a good way , jail means better health insurance for me