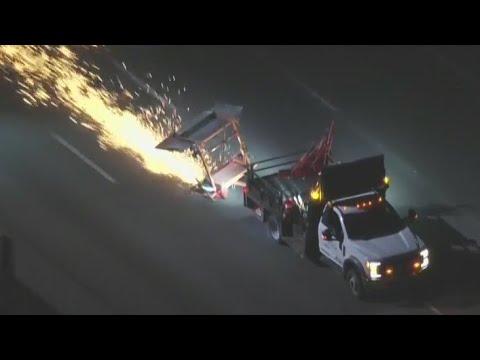 A man driving a stolen work truck led police on a crazy chase on an interstate in San Bernardino County, California, Tuesday night.

The suspect was driving a stolen CalTrans construction truck. The Fontana Police and the Ontario Police Department were involved in the chase.

A video taken from a helicopter shows the suspect driving the truck along Interstate 10 in southern California with multiple police cars behind.

The truck was pulling something, possibly a road construction sign, causing sparks to fly as he drove down the interstate.

At one point, the truck hit the side of a white sedan.

A police vehicle finally drove alongside the truck and shoved it into the concrete median, forcing it to a stop.

The driver then jumped out of the truck and fled on foot along the freeway.

He was ultimately tackled by a police K-9 and arrested by officers. EMTs loaded the suspect into an ambulance. It is unclear whether he was seriously injured.

There were no other injuries reported in the incident. Police have not released what charges the suspect will face.