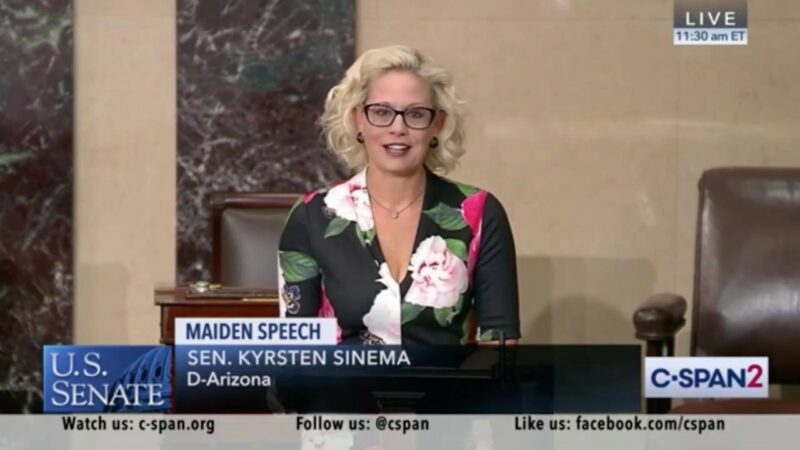 Democratic Arizona Sen. Kyrsten Sinema spoke out against mounting political division during a fiery floor speech where she reiterated her pledge not to eliminate the filibuster.

“I ran for the U.S. Senate rejecting partisanship, willing to work with anyone to help Arizonans build better and more secure lives,” she said. Sinema and Democratic West Virginia Sen. Joe Manchin, have both made it clear that they will not vote to lower the 60 vote threshold required for passing most pieces of legislation, even as President Joe Biden and others have called it a tool of segregation.

“I will not support separate actions that worsen the underlying disease of division infecting our country. The debate over the 60-vote threshold shines a light on our broader challenges. There is no need for me to restate its role protecting our country from wild reversals in federal policy,” Sinema said of the filibuster. “American politics are cyclical and the granting of power in Washington, D.C. is exchanged regularly by the voters from one party to another. This shift of power back and forth means the Senate 60-vote threshold has proved maddening to members of both.”

Sinema blamed recent fights over the filibuster on Democrats whose “increased use of requiring cloture for judicial nominees under President George W. Bush led to similar tactics by Republicans under president Barack Obama.”

“The 2013 decision by Senate Democrats to eliminate the 60-vote threshold for most judicial and presidential nominations led directly to a response in 2017 by Senate Republicans, who eliminated the threshold for Supreme Court nominees. These shortsighted actions by both parties have led to our current American judiciary and Supreme Court, which as I stand here today is considering questions regarding fundamental rights Americans have enjoyed for decades,” she continued.

Sinema accused politicians “who spend their career in party politics” of thinking that “their respective party alone can move the country forward.” This mindset leads to “policy inextricably being pushed from the middle towards the extremes,” she said.

Sinema also slammed leading Democrats’ strategy of “pushing party-line changes … in an equally divided Senate” and with the “House of Representatives … nearly equally divided as well.