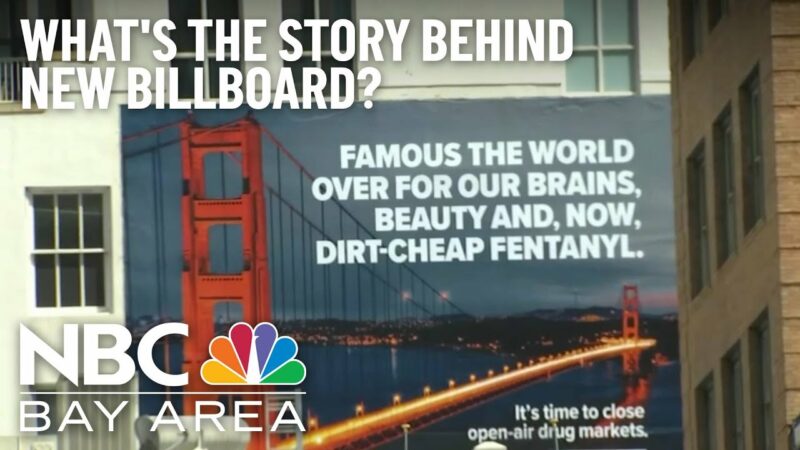 A group of mothers of drug addicts in San Francisco who are frustrated with local leaders paid for a billboard in the city’s downtown that reads, “Famous the world over for our brains, beauty and, now, dirt-cheap fentanyl.”

Part of the group Mothers Against Drug Deaths (MADD), the mothers expressed their anger with Democratic San Francisco Mayor London Breed who recently traveled to Europe where she promoted tourism to San Francisco.

“When the mayor went to Europe to ask for tourists to come, we felt like ‘Wow, how can you bring tourists into this environment, open drug market?’ It’s unsafe,” said Gina McDonald, a member of MADD.

A spokesperson for Mayor Breed said, “The Mayor agrees that we need to break up open-air drug dealing in San Francisco. Police officers are making arrests every day, and in the last few weeks an additional 20 officers have been added to the Tenderloin neighborhood to support our emergency response initiative.”

Some San Francisco businesses are opposed to the billboard because they say it will hurt local businesses and tourism.

Downtown San Francisco currently has a sanctioned, open-air drug market where addicts can use fentanyl and other drugs without the risk of being arrested.

Many disapprove of the market including author and California gubernatorial candidate, Michael Shellenberger.

Shellenberger has accused Democratic California Gov. Gavin Newsom and Democratic Party policies of not addressing the high crime, homelessness and drug deaths in San Francisco and he also claims the city has no plans to deal with this dire crisis.

In February, Shellenberger interviewed a homeless man in San Francisco who said the city’s policies and generous welfare benefits were the reason drugs and crime are so prevalent.