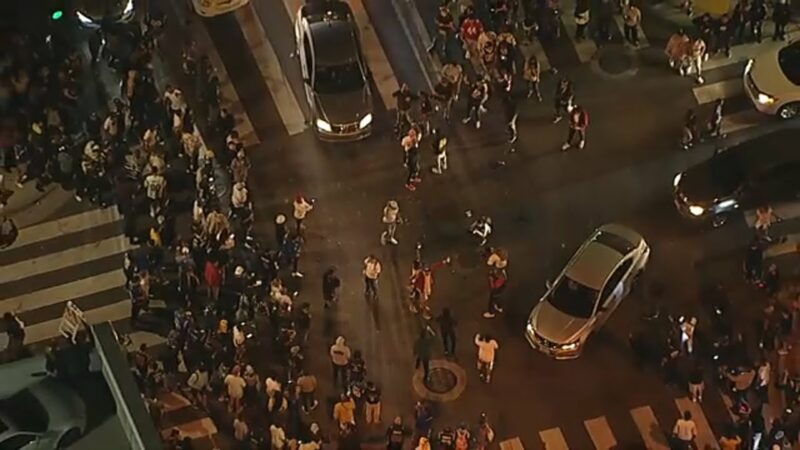 Rams Fans Take It To Another Level After Superbowl Win

Celebrations got out of hand in downtown Los Angeles Sunday after the hometown Rams won the Super Bowl and police were forced to order crowds to disperse at around 9 p.m. local time.

Interstate 110 offramps were closed in the downtown area, causing traffic congestion, according to the California Highway Patrol. LAPD also declared an unlawful assembly after orders to crowds refused to disperse then turned violent.

“We are seeing violent and destructive behavior by large crowds in the heart of the Downtown LA area. We have issued several dispersal orders and have a large police presence,” the LAPD said in a statement.

“Everyone that is part of those crowds, obey all dispersal orders and clear the streets immediately,” the LAPD added.

One crowd was marching down the street in a chaotic celebration with some violently shaking cars, climbing over them, and some marking with graffiti.

LAPD dispersing crowds in downtown LA and then this: pic.twitter.com/c1jJnUzv2T

Meanwhile, At least one person was shot in East Los Angeles on Sunday where more fans had gathered, officials said.

The shooting took place near Atlantic and Whittier boulevards, when shots were fired from one vehicle into another vehicle, Koerner said, according to the report.

The victim was transported to a hospital with injuries and is expected to recover, officials said.

Sunday’s shooting comes one day after four people were injured in a shooting incident outside The Nice Guy, an Italian restaurant in West Los Angeles, where Justin Bieber was hosting a party with celebrity guests following his concert.

A 19-year-old male and a 60-year-old male were shot and hospitalized in stable condition, another victim who was shot was treated and released. The fourth victim was Kodak Black A 24-year-old male whose real name is Bill Kapri, who shot while posing with fans outside the restaurant when the incident erupted.

“Preliminary investigation revealed there was a physical altercation between several individuals at the location,” the Los Angeles Police Department said in a statement. “Gunshots were fired by an unknown suspect, who then fled south from the location.”

Police were still searching for the suspect.