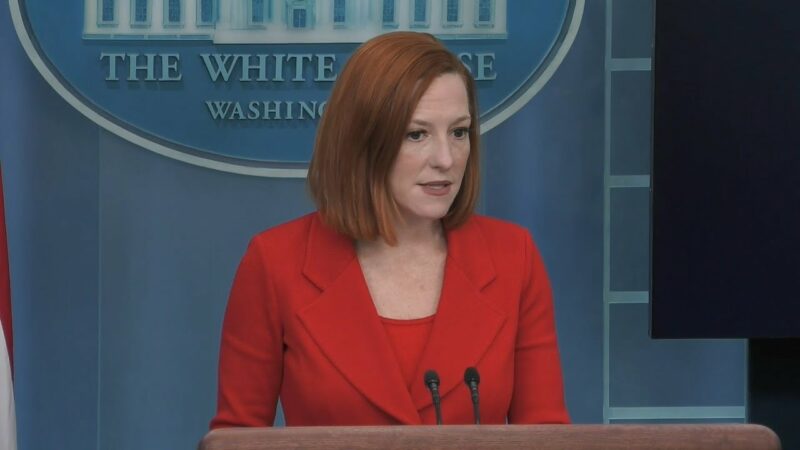 “The president has stated and reiterated his commitment to nominating a Black woman to the Supreme Court and certainly stands by that,” Psaki said during the daily press briefing. Psaki said the president “stands by” his remarks.

During a February 2020 Democratic debate, Biden promised that he would nominate a Black woman to serve on the Supreme Court.

While Psaki said that Biden would keep his commitment to appoint a Black woman, she generally refused to comment on Breyer’s retirement, given that Breyer had not made the announcement himself.

Asked if there is “any scenario in which the president would select” Harris to serve on the Supreme Court, Psaki said, “I’m not going to speak to any considerations, preparations, lists.” But, she noted, “The president has every intention, as he has said before, of running for reelection and for running for reelection with Vice President Harris on the ticket as his partner.”

“As we’ve stated earlier, and as you heard the president say, there is a long history of Supreme Court justices determining when they may retire, if they retire, and announcing that,” she added. “That remains the case today.”

Breyer, 83, has been the subject of much speculation concerning his retirement. Liberal activists were calling for him to retire not long after Biden was inaugurated. Sources close to him, say that Breyer made the decision on his own terms and was not forced out.

affirmative action is NOT THE WAY TO GO!!!! you have to go by merit, character, NOT SKIN COLOR, especially black racists… FJB

If that’s the case then I would go with Candice Owens or Candoleezza Rice…someone with brains.

Of course, that was before he discovered Aunt Jemima was not available.

Funny coming from a guy that hates niggers. Remember his comment, “I don’t want my children growing up in a racial jungle?” She may not be qualified for jack shit, but that’s OK. Kinda like himself

Lori Lightfoot and Stacey Abrams say “Pick me! Pick me!”

Whitch lie would that be ??? Biden can’t keep a fake promise . Not sure what she’s smoking to say or think Biden will keep any promise made to steal the elections

Nothing raciest about that. Typical demonRAT. I’ll I’ll find the dumbest nigger I can, and plunk her ass on the court..