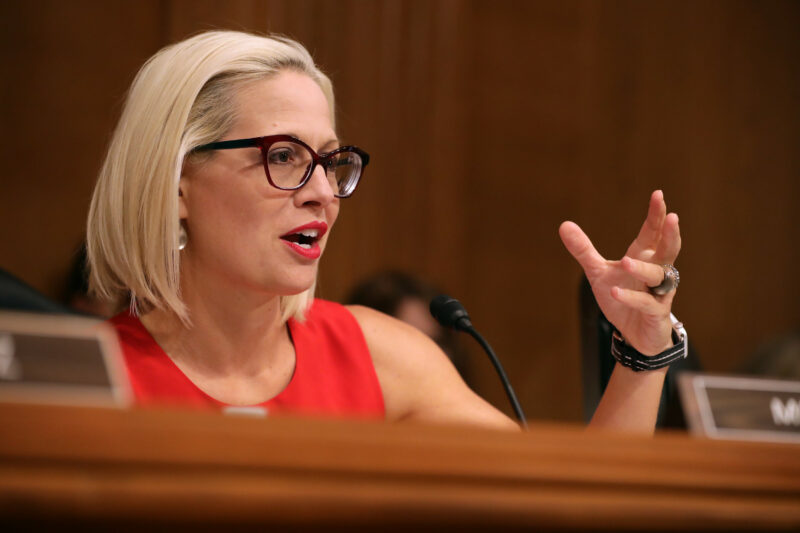 The pro-abortion group EMILY’s List has threatened to pull their endorsement from Democratic Arizona Sen. Kyrsten Sinema should she continue to support the filibuster.

EMILY’s Lis, which endorses and finances Democratic female candidates who are in support of legalized abortion, endorsed Sinema during her Senate run in 2018 and contributed $9,500 to her campaign. The group has raised money for Sinema in all four of her previous election cycles. She will be up for reelection in 2024.

“Sen. Sinema’s decision to reject the voices of allies, partners, and constituents who believe the importance of voting rights outweighs that of an arcane process means she will find herself standing alone in the next election,” EMILY’s List President Laphonza Butler said in a statement released Tuesday. “If Sen. Sinema can not support a path forward for the passage of this legislation, we believe she undermines the foundations of our democracy, her own path to victory, and also the mission of EMILY’s List, and we will be unable to endorse her moving forward.”

Sinema has made it clear that she does not support making changes to the filibuster without Republican support. In a Jan. 13 floor speech, Sinema stated that she would oppose “actions that worsen the underlying disease of division infecting our country.”

Fellow Democrats, including President Joe Biden, have compared Sinema and West Virginia Sen. Joe Manchin with segregationists for their refusal to change Senate rules to pass two bills that would effectively nationalize elections.

“History has never been kind to those who’ve sided with voter suppression over voters’ rights, and it will be even less kind for those who side with election subversion,” Biden said during a Jan. 11 speech in which he name-checked Alabama Gov. George Wallace, Birmingham Public Safety Commissioner Bull Connor, and President of the Confederacy Jefferson Davis.

This is not the first time that EMILY’s List has inserted itself into a fight between the moderate and left wings of the party. The group claimed victory in 2020 when Marie Newman defeated pro-life Illinois Rep. Dan Lipinski in a brutal primary. EMILY’s List has also repeatedly endorsed a challenger to Texas Rep. Henry Cuellar, who was the only Democrat in the House to vote against a bill that would legalize abortion up until birth.

Sinema supports legalized abortion and has a lifetime “F” rating from the pro-life Susan B. Anthony List.

Baby killers don’t care about our country, they care about fucking, getting pregnant, and killing more babies. Joe’s America!!