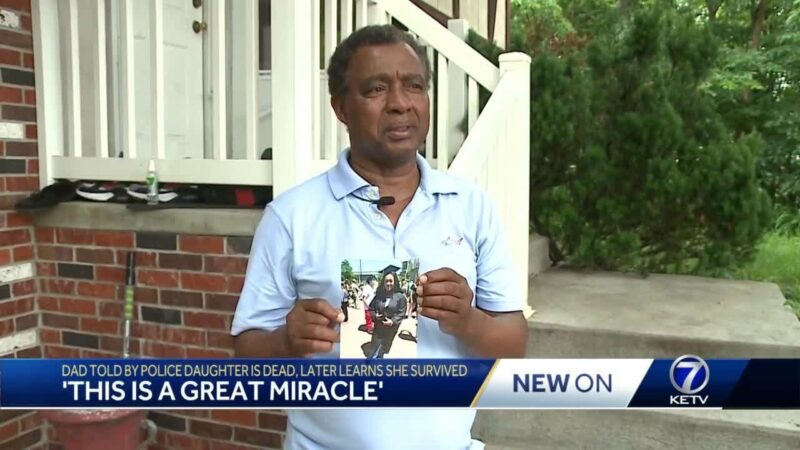 Police in Nebraska told a father that his 18-year-old daughter had been killed in a car accident on Memorial Day weekend, but later learned the officer had been mistaken.
Tesfaye Ailbe of Lincoln, Nebraska, said he had reluctantly agreed to let his daughter, Hannah Wadiso, go to a car race at around 7 p.m. on May 29, but he had an uneasy feeling about the decision.

“My heart didn’t settle down. I simply followed them, went all the way to the Hy-Vee area, and walked around, and I didn’t see them, so I came home,” Ailbe said.

Just one day prior, Wadiso celebrated her high school graduation. She assured her father that she would be careful, then about fours later, Ailbe received a phone call from a stranger.

“Somebody helping her pulling her from under the car said, ‘I got this number. You don’t know me, but your daughter is in [an] accident and in bad shape, please reach her now,” Ailbe said.

The distraught father rushed to the scene, where a police officer told him that his daughter had been killed in a car crash.

“On the road, we cried, fell down on our knees, prayed,” Ailbe said.

A few hours later,  Ailbe received a phone call informing him that the officer on the scene had been mistaken: His daughter was in the emergency room in serious condition, but was alive.

“The car ran over them and some people around them lifted the car up,” he said. Wadiso’s pelvis had been crushed in the accident, but after days in the hospital, she is showing signs of recovery.

“Amen, hallelujah, thank you, Jesus, this is a chance,” Ailbe said.

Lincoln police said that an 18-year-old Omaha man has since been arrested in connection with the crash, which left two people dead and 20 others injured. Police said the man had been driving nearly 90 miles per hour before the crash.