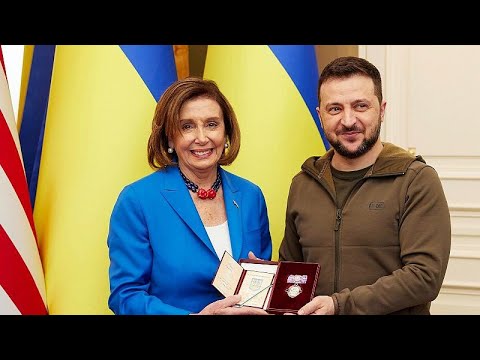 Speaker of the House Nancy Pelosi led a group of Democrats in a secret congressional delegation to Ukraine Saturday, marking the first such official visit.

The lawmakers met with Ukrainian president Volodymyr Zelenskyy for several hours, and also toured Kyiv. During the meeting, Pelosi promised Zelenskyy to “be there for you until the fight is done.”

“Our delegation traveled to Kyiv to send an unmistakable and resounding message to the entire world: America stands firmly with Ukraine.  Our meeting with President Zelenskyy began with him thanking the United States for the substantial assistance that we have provided.  He conveyed the clear need for continued security, economic and humanitarian assistance from the United States to address the devastating human toll taken on the Ukrainian people by Putin’s diabolic invasion – and our delegation proudly delivered the message that additional American support is on the way, as we work to transform President Biden’s strong funding request into a legislative package,” the Democrats said in a joint statement.

Secretary of State Antony Blinken and Secretary of Defense Lloyd Austin visited Ukraine and met with Zelenskyy on April 24. Several heads of state, most prominently British Prime Minister Boris Johnson, have also visited the country since the war began.