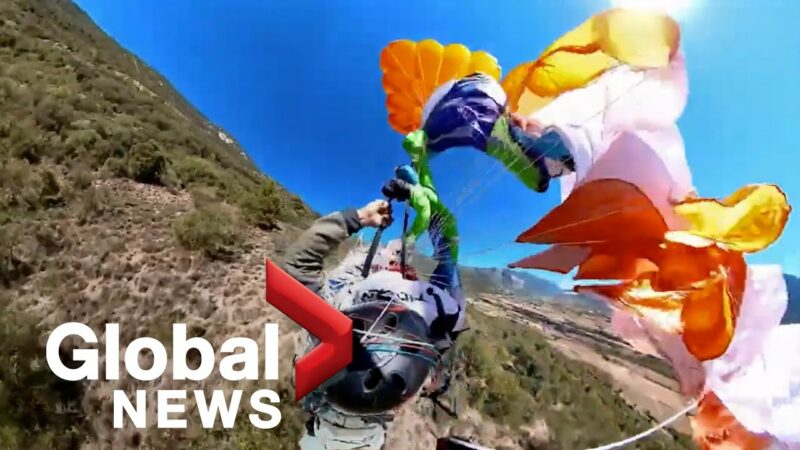 Paraglider Kevin Philipp is happy to be alive after his glider lines entangled as he was plummeting to the ground.

Philipp shared the clip Monday that shows him paragliding thousands of feet in the air when suddenly his lines become severely tangled, and the heart-stopping moment his rescue parachute opened, literally just one second before impact!

The aerobatic paraglider tried desperately to untangle the lines, but his attempt was in vain.

Philipp attempted to deploy his reserve chute, but that wouldn’t open, either.

Then, only a second before the would-be impact, Philipp ripped the bag containing the rescue chute, which miraculously opened .. most likely saving his life at the very least, averting serious injury.

“Oh my God!” Philipp yells after a hard landing into a small tree.

Philipp posted the video on YouTube, explaining that “strong turbulence” caused the lines to tangle.

As he reflected on the near disaster Philipp said: “The falling speed increased a lot due to the twisting wing. Very last chance was to manually open the rescue package. Estimated time left about 1 second This was not the day to die!”

“This occasion is quite unlucky and rare. Just to keep in mind. Fly high, land safe 😉”