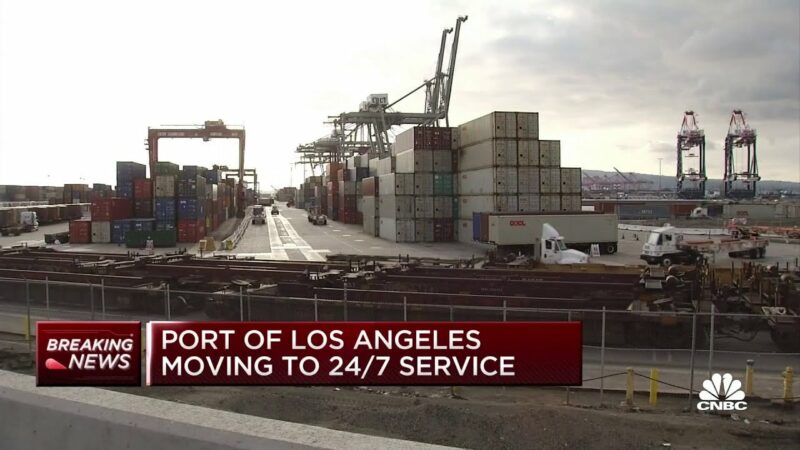 Overworked Ports Struggle To Keep Up With Supply Chain Bottleneck

The supply chain bottleneck at major U.S. ports has become a global crisis and Port of Long Beach executive director Mario Cordero claims it’s due to an increase in consumer demand and online sales.

“One factor is e-commerce,” he said. “Americans have used e-commerce at a… 20% increase. So I think there’s a certain aspect to this that is consumer demand and that’s one of the many factors that’s causing the surge and disruptions of the supply chain.”

The White House announced its plan to solve the issue by leaving ports in Los Angeles open 60 extra hours per week. Companies like UPS and Target are doing the same. Long Beach has been operating on a 24/7 schedule for roughly a month but Cordero thinks it’s going to take much more than just staying open.

“It’s going to take collaboration by everybody in the supply chain, it’s not just the marine terminal operators,” he said. “It’s going to take the truckers, the warehouses, the railroads. So I think a good spot that we’re in right now is that there’s been some strong commitment by key players to make this work.”

Cordero underlined how the crisis has had a major impact on financial policy and the economy as a $1 trillion industry. The director said even though widespread labor shortages in trucking and other sectors as a result of the coronavirus pandemic have exacerbated supply chain backup, there’s no labor shortage at the ports.

“Needless to say, we have to up our game in not only how we move containers but in terms of the hours that we operate,” he said. “Hence, the 24/7, while that’s not going to be the ultimate solution in terms of the only factor that’s going to solve this problem, it certainly takes a big step in terms of what we need to do on our end.”

Cordero predicted that Long Beach’s current 62 vessels at anchor should decrease by the end of the year. Hopefully, the supply chain could be normalized by mid-2022. At this time he advised consumers to shop early for Christmas.