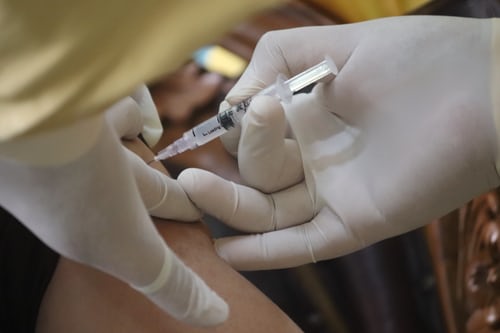 A Long Island woman has been arrested for injecting a minor with the COVID-19 vaccine without his parent’s consent. The Nassau County teacher has been reassigned from the classroom pending the outcome of the investigation, according to the district superintendent.

Laura Russo, 54, was arrested on New Year’s Eve in Sea Cliff after police were informed about her injecting the 17-year-old. Russo is a science teacher with Herricks Public Schools in New Hyde Park. District officials say the allegations are not related to school and that the incident did not occur on school property.

School officials announced, “The individual in question is a district employee who has been removed from the classroom and reassigned pending the outcome of the investigation.”

Russo had a vial of an approved COVID-19 vaccine in her home, however, it is not clear which vaccine or how or where she got it. According to officials, her son’s friend asked for the vaccine because his mother would not agree to get him vaccinated against COVID. The teenager told his mother went he got home that he had gotten the vaccine and she notified the police.

The investigation confirmed that Russo is not a medical professional nor is she authorized to administer vaccines. She has been charged with unauthorized practice of a profession. Her next court appearance is scheduled for January 21.

Maybe it should run for Governor.