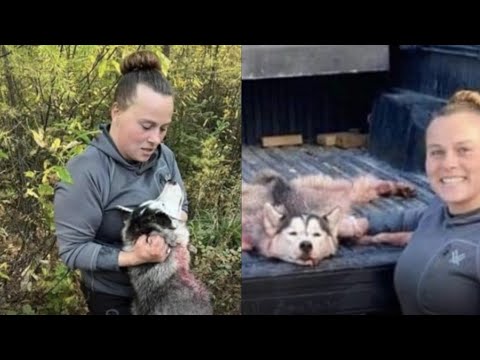 A Montana woman is in hot water after she shot and skinned a Siberian husky she mistook for a wolf while hunting. and then posted the graphic pictures on social media, sparking public outrage as well as a police investigation.

“So this morning I set out for a solo predator hunt for a fall black bear, however, I got the opportunity to take another predator wolf pup 2022 was a great feeling to text my man and say I just smoked a wolf pup #firstworld #onelesspredatorMT,” she wrote above five photos of her posing with the bloodied pooch.

In one picture, the skinned husky is laid out on Barnes’ truckbed as she smiles while she is stroking the pup’s lifeless head with one hand and clutching her rifle with the other.

Readers quickly responded to the tragic mistake and informed Barnes that she had in fact killed man’s best friend, not a wolf.

“Amber Rose here hunted, shot, AND SKINNED a HUSKY.. not a wolf, an obvious #HUSKY,” an angry Twitter user pointed out.

One critic dubbed her the “Montana dog butcher” and another called her a “psychopath.”

The Flathead County Sheriff’s Office issued a press release stating that on Sept. 23 a local had picked up 11 husky and shepherd mix dogs that had been abandoned in the Doris Creek area of Flathead National Forest about 60 miles south of Glacier National Park – the same spot where Barnes was hunting.

“During this investigation, we were advised through Montana Fish Wildlife and Parks that one of the dogs may have been shot,” the release says. “The person who is believed to have shot the dog has been identified. The case is under investigation.”

“This animal was growling howling and coming at me like it was going to eat me,” she wrote. “Yes, I made a mistake because I did think it was a hybrid wolf pup but I was not aware of 19 dogs being dropped 11 miles into the wilderness either way yes I would still have shot it because it was aggressive and coming directly for me!”

She also claimed she had obtained the license required to hunt wolves prior to the trip. Barnes pleaded with her critics to remove their posts slamming her.

“There are no charges…against me as I did NOT break any laws!!! I’m not a cruel individual just…killing people’s pets!” the post reads.

Meanwhile, police are trying to track down the people who dumped the dogs in the forest. Many of them were infected with parvovirus, which can be deadly if untreated, according to auth