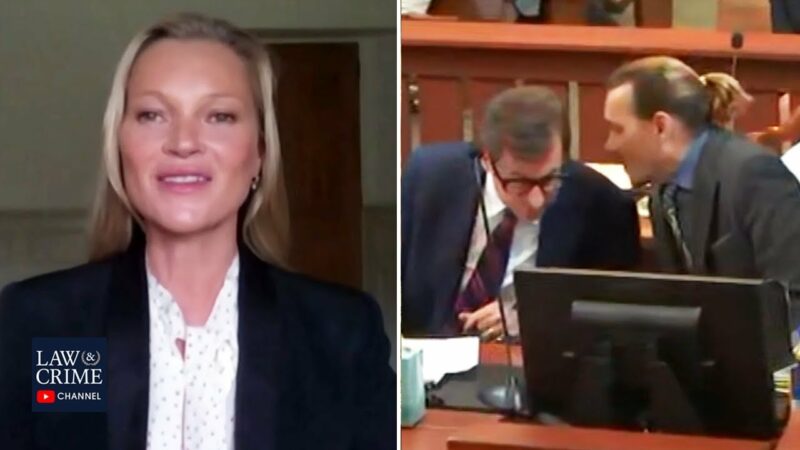 Kate Moss took the stand Wednesday where she testified via video that her ex-boyfriend Johnny Depp had never thrown or pushed her down any stairs during the entirety of their relationship.

“He never pushed me, kicked me, or threw me down any stairs,” Moss testified.

Moss, 48, was called as a rebuttal witness for Depp, 58, during his $50 million defamation trial against his ex-wife Amber Heard.

The British supermodel rebutted previous testimony from Heard when she referenced a rumor that Depp had pushed Moss down a set of stairs when the two were dating in the 1990s.

Speaking from Gloucester, England, Moss told jurors that she had been leaving her hotel room at the Golden Eye resort in Jamaica during a rainstorm when she fell down a flight of stairs and suffered an injury.

“Johnny had left the room before I did, and there had been a rainstorm. And as I left the room, I slid down the stairs and hurt my back,” she said.

“I screamed because I didn’t know what happened to me and I was in pain,” Moss testified. “And [Depp] came running back to help me and carried me to my room and got me medical attention.”

Depp’s attorney Ben Chew asked Moss: “Did Mr. Depp push you in any way down the stairs?”

Moss was excused after only a couple of minutes without cross-examination by Heard’s legal team.

Heard, 36, referenced Moss in her May 5 testimony, recounting a March 2015 fight in which she punched Depp in the face out of fear he was going to shove her sister, Whitney Henriquez, down a staircase.

Heard said she “instantly” thought about “Kate Moss and the stairs” — prompting Depp’s lawyer Ben Chew to turn and fist-pump.