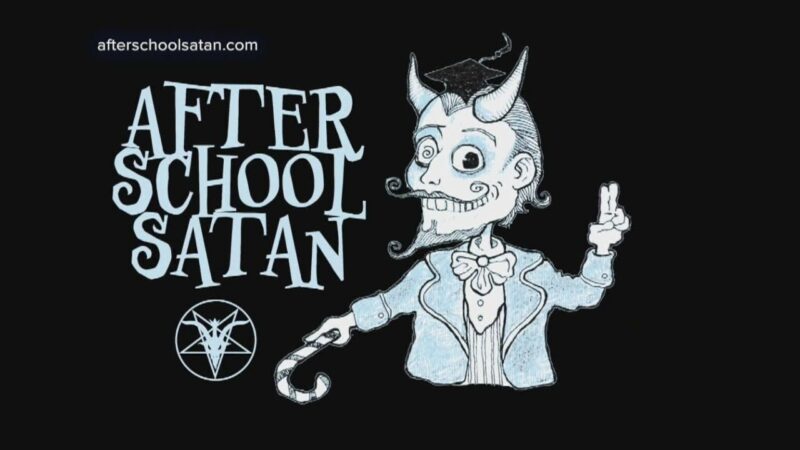 Leaders of the Satanic Temple gathered in a crimson­-walled living room of a Victorian manse in Salem-Mass renowned for its witch trials making discussing plans for an after-school program in the nation’s public elementary schools.

The group argues that Christian evangelical groups have already infiltrated the lives of America’s children through after-school religious programming in public schools, and they are determined to give children a choice: Jesus or Satan.

“It’s critical that children understand that there are multiple perspectives on all issues and that they have a choice in how they think,” said Doug Mesner, the Satanic Temple’s co-founder.

The group is scheduled to introduce its After School Satan Club to public elementary schools Monday, including one in Prince George’s County.

One Illinois school district confirmed that it has made the decision to allow the “After School Satan Club” to take place at Jane Addams Elementary School.

A copy of a flyer promoting the club, which is aimed at first through fifth graders, has been made available to students in the lobby of elementary schools, though the district claims it does not distribute them.

Chapter heads from New York, Boston, Utah, and Arizona along with others from Minneapolis, Detroit, San Jose, New Orleans, Pittsburgh, and Florida participating online, were in Salem Monday to discuss plans for promoting the club.

The Satanic Temple is bringing its fight over the constitutional separation of church and state to the nation’s schools.

According to Mesner, who goes by the professional name of Lucien Greaves, “Satan” is just a “metaphorical construct” intended to represent the rejection of all forms of tyranny over the human mind.

The curriculum for the proposed after-school clubs allegedly focuses on the development of reasoning and social skills. The group says meetings will include a healthful snack, literature lesson, creative learning activities, a science lesson, puzzle-solving, and an art project. Every child will receive a membership card and is required to have a signed parental­ permission slip to attend.

“We think it’s important for kids to be able to see multiple points of view, to reason things through, to have empathy and feelings of benevolence for their fellow human beings,” said the Satanic Temple’s Utah chapter head, who goes by the name Chalice Blythe.)

LMAO….they back niggers killing niggers. Strange times we live in!

Of course, Satan is the ultimate mind controller! So these idiots are yielding their minds to an evil but damned entity!

That’s always been the choice.

Just when I think our public education system can’t get any worse, something like this comes along.