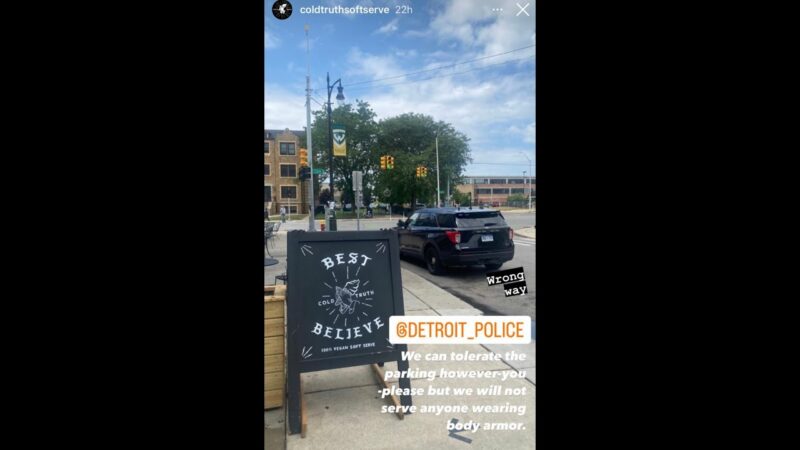 Ede wrote on Facebook that he passed out ice cream for four hours in Detroit on Wednesday, July 6.

“I think it’s a way of saying hey, don’t listen to those guys,” he said. “We love you, keep doing what you’re doing and we appreciate you. It doesn’t go unnoticed.”

Cold Truth was met with a host of negative reviews on its Google and Yelp pages following a post on its Instagram Story, which showed a police vehicle parked outside its shop.

“We can tolerate the parking, however … we will not serve anyone wearing body armor,” the caption read.

Ede said the free ice cream was provided to officers by Michigan Insurance and Financial Services, where he is currently employed.

Ede wrote on Facebook that he passed out ice cream for four hours in Detroit on Wednesday, July 6.

Cold Truth had not commented about the ice cream truck parked near its shop Wednesday. Meanwhile, social media comments continued criticizing the store for its previous comments.

Later that same day, a Detroit police officer was fatally shot in the line of duty. Detroit Police Chief James White said the officer was a 5-year veteran.

“Just spent four hours today giving out free ice cream to Detroit’s finest, only to have a Detroit police officer killed in the line of duty moments ago,” Ede said in a Facebook post. “This is why we have to support our police. They do a job most can’t or won’t. Having worn that uniform, it is the most thankless job today.”