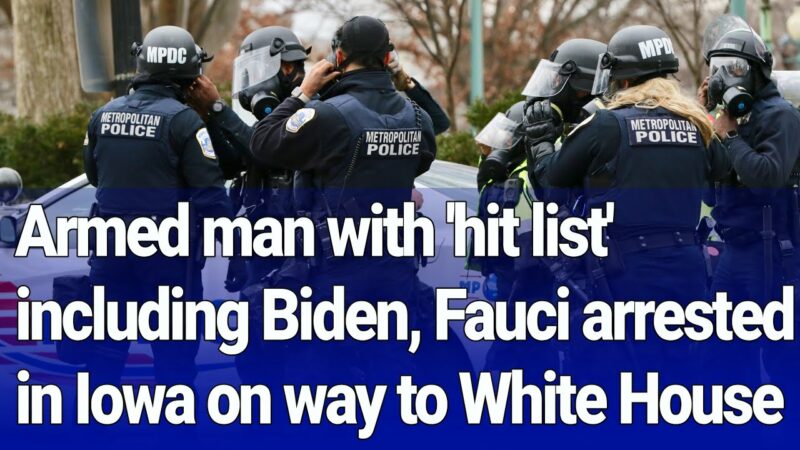 A man that was armed to the teeth with weapons was on his way to the White House to kill US President Joe Biden, his chief medical advisor Dr. Anthony Fauci and several other prominent American politicians on a what is being described as a ‘Tik Tok hit list’ was intercepted and detained in the state of Iowa last week, court records stated. Kuachua Brillion Xiong, 25, from Sacramento, is now facing a federal charge of “Threats Against US President” along with other charges because he was headed to Washington, DC with a loaded AR-15 rifle and ammunition loaded in the vehicle.

Xiong was pulled over on I-80 by Sergeant Justin Larson with the Cass County Sheriff’s Office, for speeding and driving ‘aggressively’ in traffic. When pulled over for his suspicious behavior, Xiong told the sergeant that he was heading to Washington, DC to take pictures of the White House. Upon searching his vehicle the officer found loaded magazines, boxes of ammunition, body armor, and medical kits in the trunk of the car and said that he was on his way to “kill those in power.”

The 25-year-old  grocery store worker from Merced, California started his trip from his home in Sacramento according to the criminal complaint written by a Secret Service Special Agent from Omaha. He was arrested in Cass County and has since been in detention in a Council Bluffs jail in Pottawattamie. He was brought in to the Sheriff’s Office by the sergeant, where he said that he was called upon by God to “combat evil demons in the White House.”

The special agent stated in the court document that Xiong believed, “he is the only person remaining who can free the United States of evil and it is necessary for him to kill those in positions of power.” If he had not been pulled over, the special agent told the investigators, he would have continued on to Washington, DC, and committed the crimes.

Google Maps show that Xiong was headed to the White House at 1600 Pennsylvania Avenue. He was planning to shoot former US President Bill Clinton, Barack Obama, US top infectious diseases expert Dr. Anthony Fauci, and Meta CEO Mark Zuckerberg. He said that he intended to kill Biden unless he complied with his demands.

A drawing was recovered from the man with plans to trespass the White House security points. He had plans to “grapple a hook to climb the perimeter fence before getting into the White House to kill those on his hit list,” the court document reads. If released from custody, the man vowed that he would resume his journey to the White House and “do whatever it takes” to complete his plan,” it further stated.

“[Xiong said] that if released from custody, he would immediately resume traveling to the White House … and ‘do whatever it takes to complete his plan,” Larson wrote in the complaint seen by the agencies. “Xiong stated that he has no intention of returning to California to see his family because he plans on dying while fighting evil demons in the White House.”
Subscribe
Login
3 Comments
Oldest
Newest Most Voted
Inline Feedbacks
View all comments

Did the cock, I mean cop have a search warrant?

I agree with his sentiments, but not his solution.

He should of said he’s a democrat , then they would of took him there and gave him the key to the city . While he took them all out of the equation