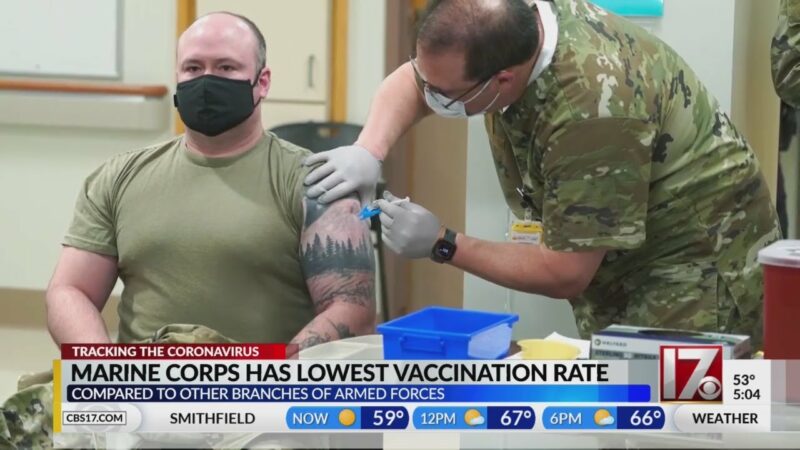 More than 200 U.S. Marines who are still unvaccinated against COVID-19 have been discharged from service.

Active-duty Marines had a deadline of Nov. 14 to get vaccinated or to apply for an exemption. Service members who did not comply would face being discharged.

A total of 206 Marines have been discharged as of Wednesday, a service branch spokesperson said.

The number of discharged Marines represented slightly more than one-tenth of 1% of the total active-duty members which is roughly 182,500.

The latest statistics showed that 94% of active-duty Marines were fully vaccinated, with another 1% being partially vaccinated.

About 9,125 active-duty Marines, 5% of the active force, had not been vaccinated, although that number included members who had received or requested an exemption.

The Marines have processed and rejected 3,115 religious exemption requests with some still awaiting determination.

A total of 83% of Marine reserves, who had until mid-December to get vaccinated, are vaccinated. Partially vaccinated reservists increase that percentage to 86%.

Any U.S. service members discharged over their refusal to get the COVID-19 vaccine can only be discharged by no less than the general designation — that’s due to a provision in the 2022 National Defense Authorization Act signed by President Joe Biden.

Military leaders have been warning for months that service members would face consequences if they did not comply with the order to get the COVID-19 vaccine. They began enforcing the mandate in early December.

“Marines pride themselves on being a ready force,” Marine Corps spokesman Capt. Andrew Wood said at the beginning of the month. “We don’t quite yet have a solid understanding of how many Marines are going to be administratively separated or the impacts on readiness.

“There are no Marines we are trying to throw away. We’re a small force already.”

Pentagon spokesman John Kirby has said there are “active” conversations going on within Defense Department leadership about whether to mandate booster shots.

Stupid is as stupid does.