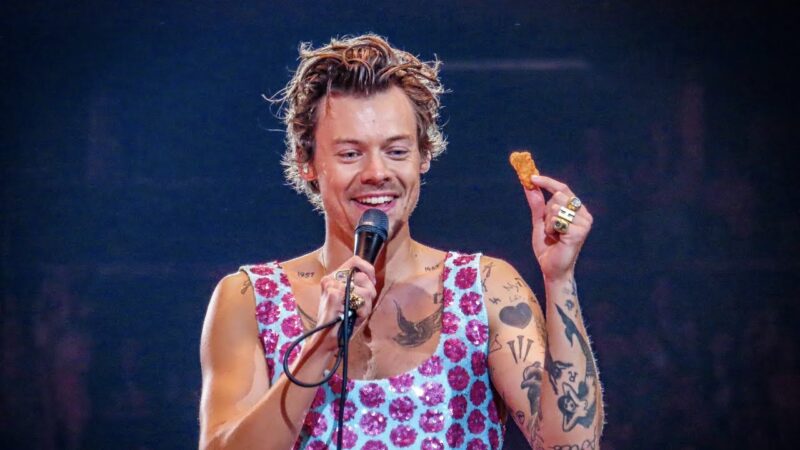 Harry Styles was somewhat amused when a fan threw a chicken nugget on stage as he performed at his New York concert on Saturday evening.

The 28-year-0ld “Watermelon Sugar” singer had been performing at Madison Square Garden on Saturday night when the nugget landed on stage.

As he picked it up, he asked his fans: “Is this a chicken nugget?!”

Holding the nugget in the air before walking around the stage he added: “Interesting, very interesting approach.”

In an attempt to find the culprit, Harry asks the crowd: “Who threw the chicken nugget? It’s another chicken nugget,” he added as another nugget landed on the stage.

Fans then began chanting for the singer to eat the nugget, but he responds: “I don’t eat chicken, sorry. I don’t eat meat.”

He then throws the first nugget back to the audience member and says: “There you go, you can have your nugget back,” before turning around to get the second one.

Holding the nugget in the air, he says: “First of all, this is cold and I’m assuming very old.”

The fan shouts back: “No,” before the crowd begins chanting “eat it, eat it, eat it” again, causing Harry to laugh.

“Would you like it back,” he asks the fan, and as they say yes, he looks baffled and repeats: “You want it back? Why?” The audience laughs as Harry repeats the fan’s answer, which was simply “because”.

“Oh now it’s on the floor,” Harry says before he advises the crowd member, “don’t eat it, we will get you another nugget, OK? Fear not.”