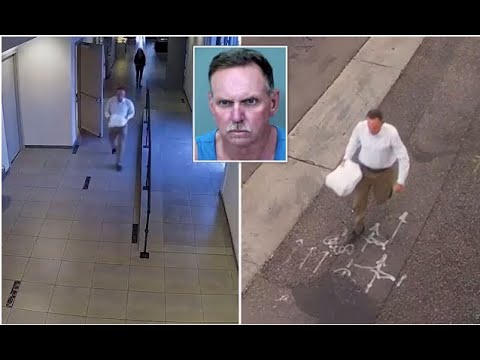 Surveillance video captured the moment a suspect stole a money box loaded with thousands of dollars in cash and gift cards. “It was right during the ceremony when everyone was sitting and no one would be around,” the bride said.

The Arizona couple was enjoying their dream wedding until a thief walked away with expensive gifts and a priceless card from the bride’s late grandmother.

Video surveillance cameras show the wedding crasher stealing a money box loaded with thousands of dollars in cash and gift cards, according to police.

Ryan and Katherine McWilliams were exchanging vows at a beautiful outdoor venue near Phoenix and while the couple and guest were distracted the thief made his move.

“He’s the perfect random guest who shows up late to a wedding,” Ryan said.

“He knew exactly when to come. It was right during the ceremony when everyone was sitting and no one would be around,” Katherine said.

The bride’s parents are also outraged because one of the gifts taken was a card from Katherine’s grandmother who died of COVID-19 in January.

“There was a special card from her and a note from her, and there’s no way to get that back,” the bride’s father said.

The suspect was arrested and identified as former sheriff’s deputy Landon Rankin. Rankin, who also once appeared on a TV crime show, was charged with two counts of burglary.

The bride says that their friends and family waited until the next day to tell them so they could enjoy their wedding.

“We had no idea that it had happened. It was the most wonderful and perfect day of our entire lives,” Katherine said.

The couple has set up a GoFundMe to try to recoup the $2,000 in gifts they lost.