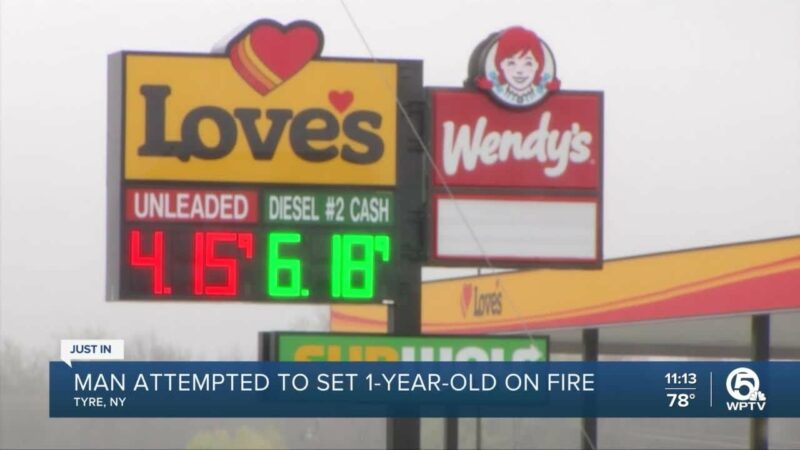 A Florida man is facing attempted aggravated murder charges after attempting to light a 1-year-old child on fire at the Love’s Truck Stop in Tyre, New York.

Deputies were called to the gas station at around 5:30 a.m. after someone reported fires erupting inside the building. Responding officers “located two suspects who they believed to have started and/or attempted to start the fires,” as well as a 1-year-old toddler who was covered in gasoline, according to Sheriff Timothy Luce. The child was immediately transported to Geneva General Hospital.

After a long four hours, the scene was declared safe and the device was found to be a replica that was not incendiary in nature.

At that time, a 4-year-old was discovered in the cab of a tractor-trailer at the scene, with suspected head injuries. That child was also transported to Geneva General Hospital by North Seneca Ambulance but was later airlifted to Strong Memorial Hospital by LifeNet.

Both children who are now in the custody of the Seneca County Division of Human Services are expected to fully recover.

Avery was detained without incident, according to the Sheriff’s Office.

Although Luce did not name the other suspect in this case, he did say deputies believe both suspects covered the younger child in a flammable liquid and attempted to light the child on fire inside the building.

Officials said as of Wednesday, they do believe there is a parental relationship, but “have not fully determined that yet.”

The circumstances surrounding the 4-year-old are still under investigation.

Luce said the building did suffer minor damage from the fires.