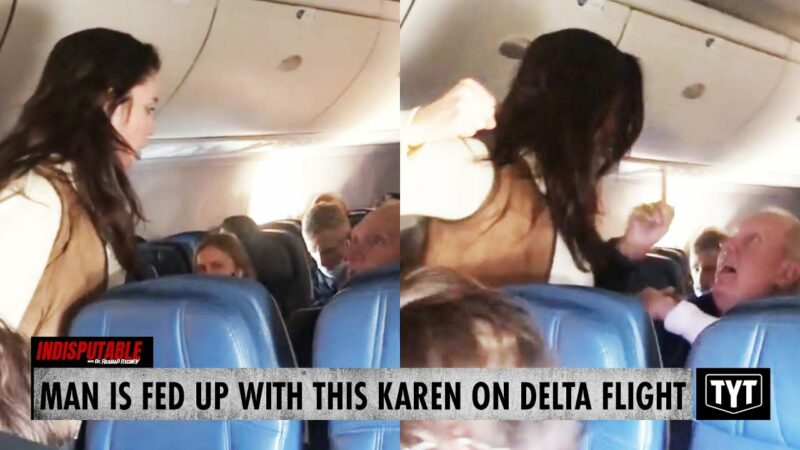 An irate airline passenger was arrested by FBI agents after she assaulted an elderly man for not wearing his mask.

Patricia Cornwall became enraged during a Delta flight Thursday from Tampa to Atlanta, when the elderly man she confronted would not wear his mask while he was eating and drinking. In a video that has been posted to Twitter, the woman can be heard screaming at the man to put his “f*****g mask on.”  She went on to tell him to “stand [his] ass up,” to which the man responds by saying, “sit down Karen.” Ironically the woman was wearing her own mask on her chin.

A flight attendant and another member of the flight crew tried to intervene, instructing the woman to “mask up.” She gestures toward the man, and yells  “tell him to mask up.” Things escalate when the man calls the angry woman a “b***h” and she punches him.

“As soon as we get to Atlanta, you’re going to jail,” he tells her.

The altercation continues with Cornwall, while restrained by the flight attendant, telling the man he is a “f*****g piece of s**t.” The man accused her of also spitting on him and scratching him before she is taken away by two FBI agents.

“This disturbance led to the injury of fellow passengers and Delta employees,” the APD said in a statement. “Based on the statements gathered and visible evidence, officers detained Ms. Cornwall and contacted the on-call FBI agent. The officers then relocated with Ms. Cornwall to the domestic Atlanta Police precinct where FBI agents responded and took custody of Ms. Cornwall.”

Since the beginning of the COVID-19 pandemic, the federal mask mandate on airlines has become a catalyst for disruptive behavior. Over the past year, there have been 5,779 unruly passenger reports, according to the Federal Aviation Administration, of those, 4,156 were mask-related.

Hopefully the beeyotch will rot in jail.