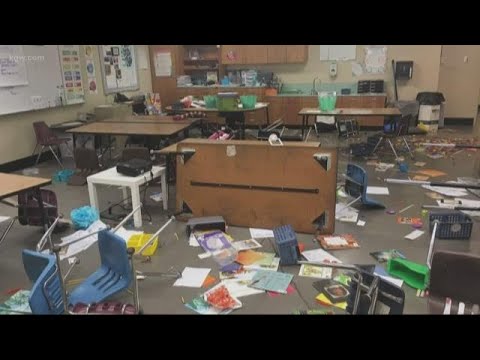 A wild moose crashed through the window of an elementary school in Canada Thursday. The overzealous moose shattered the glass window of a shared space between the Sylvia Fedoruk School and St. Nicholas Catholic School in Saskatchewan where he made his entrance to a before-school program where fourteen students were in attendance, said Veronica Baker, a spokeswoman for Saskatoon Public Schools.

“We’re still kind of all in shock about it,” Baker said.

Teachers and students were able to exit the classroom without serious injuries, while one student did sustain minor injury no medical attention was needed.

“While we have dealt with moose and other wild animals on school property before, we haven’t had a situation like this,” Baker said. “It seems unbelievable.”

The moose was very close to its usual habitat, Steve Dobko, a conservation officer with the Ministry of Environment for Saskatchewan, said. “But it took a wrong turn and it ended up in a schoolyard,” Dobko said.

Dobko described the moose as tall, skinny and weighing between 750 to 800 pounds which is considered small by moose standards.
Conservation officers tranquilized the animal that was later transferred to an area a safe distance from the school.

I thought it was going to say Pedo Biden dropped by to sniff
hair.

I don’t care for Biden, but why the unnecessary comment not related to the story? Are you like the liberals with TDS?