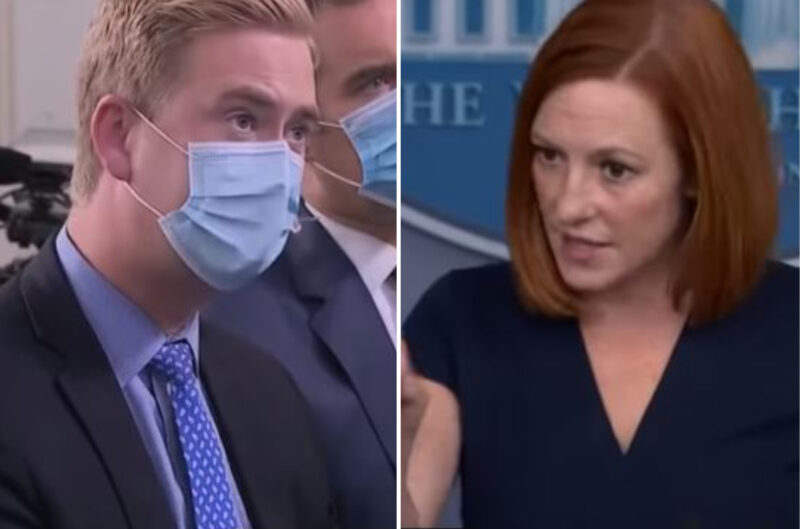 Doocy Presses Psaki To Explain Why Migrants Are Being Released Into The U.S.

President Joe Biden’s administration has faced criticism over its handling of the crisis at the southern border since migrant crossings began to surge in early 2021.

“Why is it that large numbers of single adult men are being released into the United States just hours after being apprehended at the southern border?” Doocy asked.

“I’m not sure the specifics of what you’re referring to, Peter. What I can tell you in terms of what our policy is and how we’re approaching the border is that we continue to be under Title 42,” Psaki responded. “Migrants who cannot be expelled under Title 42 are placed into immigration proceedings, and one of those avenues could be placement in an alternative-to-detention program in the interior of the United States.”

“Sometimes that means moving migrants to other parts of the United States to move to different detention facilities where they wait for next steps in the immigration process, such as a court hearing, and are required to check-in with the local ICE office,” she added. “So that is certainly something that is happening out there in the country and is consistent with our policy.”

Doocy then pushed Psaki to explain how it was handling cases where the migrants fail to check-in with ICE.

“DHS says more than 47,000 of these migrants that were given notices to report did not show up, so why let them into the U.S. unsupervised in the first place?” he asked.

“Well, again, we have stringent protocols and processes that we implement here. That includes expelling individuals who come in under Title 42 given we are still in a global pandemic, and it includes that those who do not show up will be subject to the repercussions of that,” she finished.

The Biden administration has tried to downplay accusations that the ongoing border surge is due to its immigration policies. The heads of state of both Guatemala and Mexico have alleged that Biden’s policies are to blame while migrants crossing the border have openly thanked Biden.

“Expectations were created that with the Government of President Joe Biden there would be better treatment of migrants,” Obrador said at the time. “And this has caused Central American migrants, and also from our country, wanting to cross the border thinking that it is easier to do so.”

What I want to ask her is , why isn’t Biden making the illegals get the China virus vaccine like he’s trying to do to us . How can you control the China virus if you can’t control the flow of the China virus coming in the country with open borders ??? How stupid is he ??? How can she stand looking at herself after lying so bad for Biden . What is she going to say to God on judgment day . That’s if she even believes in God . From the look of things .. I’d say she doesn’t .