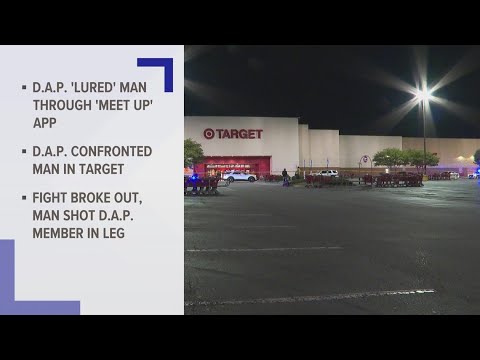 Three members of the Dads Against Predators social media group “lured” a man to a North Carolina store intent on attacking him, officials said.
The man reportedly fired a gun inside a Target in an effort to stop the beating on June 28. One of his accused attackers was injured in the shooting but it didn’t stop the assault at the Hanes Mall Boulevard store, the Winston-Salem Police Department said.

Officials said the group pummeled the man, took his gun, and left the Target in a car with a possible Ohio license plate.

“Our team immediately evacuated the store and the Winston-Salem Police Department quickly responded,” Target spokesperson Brian Harper-Tibaldo wrote in an emailed statement to McClatchy News at the time of the incident. “The store has since reopened and we’re assisting law enforcement with their investigation.”

Officials said that they have now identified the three men responsible for it. The men, from North Carolina and Ohio,  are tied to a group called Dads Against Predators, according to police.

Officers did not provide additional details about the group but said three people connected to it “‘lured’ the victim to the Target.” They’re accused of using the Meetup app, to arrange the encounter.

“Once the victim arrived inside the Target the three males approached the victim and confronted him as to why he was at the Target,” police wrote. “At least one of the… males was recording this interaction with their cellular phone when the victim slapped the phone from one of the males which resulted in a physical altercation.”

During the subsequent fight, police said the man who had been lured to the store was hit in the head over and over again. At one point, he reportedly fired a single shot to try to stop the assault.

The 25-year-old gunman later went to a hospital with minor injuries.

The following day, one of the accused attackers was treated at an Ohio medical center after he said he was shot in the leg. Officials said they also found the gun that had been taken during the Target incident.