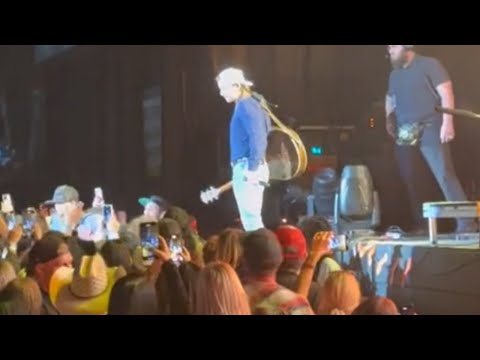 Country music star Morgan Wallen stopped his Saturday concert in Wheatland, California, to kick out some fans who’d gotten into a brawl.

Wallen can be seen in a video shared on TikTok singing “This Bar” when he told the band to stop the music. “What kind shit’s going on over here?” Wallen asked the crowd, as he walked to the far end of the stage before telling security, “kick this stupid motherf****r outta here.”

The crowd can be heard erupting into cheers Wallen. He turned back to his fans and asked, “aright, does anybody else wanna do some stupid shit, or are we all good?” The crowd roared.

Apparently, a man was being aggressive with his wife, so another man came to her aid. In the end, both the husband and wife were arrested.

Wallen is currently in midst of his sold-out “Dangerous” tour, where he’s stopped more than one show to help fans in distress.