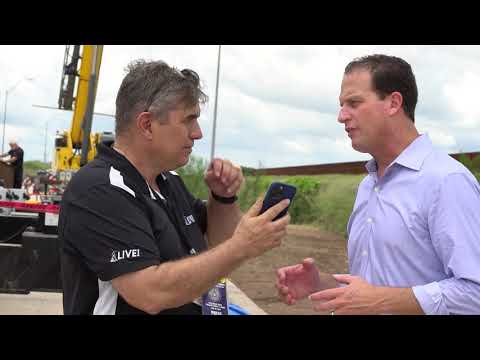 Congressman At The Border Says The Worst Is Yet To Come

Rep. August Pfluger, R-Texas, visited the site of the migrant surge in Del Rio, Texas where he commented that the number of predominantly Haitian migrants camping there in squalor is nearing 15,000 and further warned the situation is likely to get much worse.

Officials are describing the situation as being “out of control” as they scramble to deal with the flood of migrants that spiked from 4,000 on Wednesday to a shocking 14,878 as of Saturday, according to Pfluger.

“It’s worse than you could imagine,” Pfluger said.

The migrants have made a make-shift camp under the International bridge in Del Rio to shelter from the 100+ degree heat as the numbers grow exponentially while they wait to be processed by Border Patrol. Officials have rushed to get toilets, water, medical supplies and other humanitarian aid to try and help.

U.S. Customs and Border Protection (CBP) have shut down the port of entry in Del Rio, diverting legal trade and travel 57 miles to Eagle Pass, at the same time shutting down border checkpoints to screen for illegal immigrants and illicit cargo.

Saturday the DHS announced that more agents and staff
would be on the way and that deportation flights are set to be increased as well, stressing that “our borders are not open” and most migrants will be expelled by way of Title 42 public health protections.

Pfluger is one of a number of lawmakers saying the situation was sparked by the Biden administration’s halt to deportation flights, adding that Haitians and others who were waiting in Central America, took that as a green light to come to the U.S.

“So when those flights were stopped by the U.S. government…they got the word and it was like ‘go time,”
he said.

According to Pfluger, there were reports of criminal activity, as well as prostitiution and drugs, making it a very real security situation.

“If they decided to riot or if unrest happened, it would be a terrible situation,” he said. “It is ripe. It is 100 degrees outside right now and you literally have 14,878 people here – this is how serious the situation is.”

The majority of migrants are military-age men between the ages of 18-35, a number of families – including several heavily pregnant women, some of whom are due, according to the congressman.

In addition to the halting of deportation flights, which DHS is now resuming, critics are citing the extensions of Temporary Protected Status (TPS) for Haitians already in the U.S. as well as a larger effort by the Biden administration to rollback Trump-era border protections like border wall construction and the Migrant Protection Protocols (MPP).

The Biden administration has been looking at a sharp increase in migration since taking office, which has hit a high of more than 200,000 encounters monthly for July and August. The administration blames the Trump administration’s ending of legal asylum pathways, as well as “root causes” like violence, poverty and corruption.

Pfluger called on the Biden administration to reverse its ending of Trump-era policies, and asked: “Where is the leadership?”

“What is the administration doing? he asked. “Why are they not down here right this second like I am?

He also noted the contrast of the migrants from countries with low vaccination rates packed in right on top of each other, with the strict COVID-19 protocols being implemented by the Biden administration.

“We’ve got a vaccine mandate in the United States for companies with 100 or more people and we’ve got 14,878 people here – are you kidding me? our priorities are completely out of whack right now.”

Pfluger praised the overworked Border Patrol agents, and was clearly frustrated as he said that he believed the crisis could have been averted by action by the administration.