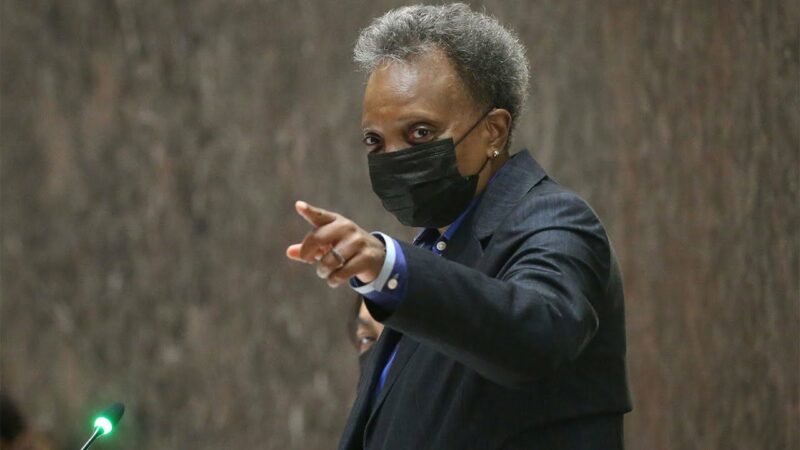 Chicago Mayor Lori Lightfoot said that she will take action against teachers who refuse to show up to school today after a union voted against in-person learning.

The mayor responded quickly following Tuesday’s vote, in which 73% of the Chicago Teachers Union said they wanted to go back to remote learning until the current spike in COVID-19 cases “substantially subsides.” The vote resulted in classes being canceled on Wednesday. Lightfoot responded by saying that teachers who do not show up at school Wednesday will lose pay.

The union alleges that Lightfoot is doing more than just withholding pay.

“Mayor Lightfoot has started locking Chicago public school teachers and staff out of their Google Classrooms,” the union tweeted early Wednesday morning, hours after it had posted, “all members will log in remotely to work.”

The union vote took place one day after students had returned from winter break. Lightfoot addressed the matter Tuesday night in a tweet where she said that she wanted to “speak directly to the parents” who were concerned about the situation.

“I want to assure you that I am doing everything in my power to keep our students in school, where they belong, learning,” Lightfoot said.

The mayor said she is “committed” to continuing talks with the union “and negotiating a fair agreement” but that she is against “unilateral action to shut down the entire district, depriving hundreds of thousands of students of the safe, in-person schooling environment they need.”

Lightfoot emphasized the need to follow the guidance of experts, such as those at the CDC and Chicago Department of Public Health, and keep schools open while utilizing “a robust set of mitigation tactics” to deal with the COVID-19 pandemic.

“I’m urging teachers. Show up to your schools. Your kids need you,” Lightfoot said.

The union also addressed parents on Twitter, saying they also want to do what is best for students.

“To be clear: Educators of this city want to be in buildings with their students. We believe that classrooms are where our children should be. But as the results tonight show, Mayor Lightfoot and her CPS team have yet to provide safety for the overwhelming majority of schools,” the union tweeted.

The union said it will not change its position until COVID-19 case numbers subside or Lightfoot’s side “signs an agreement establishing conditions for return that are voted on and approved by the CTU House of Delegates.”

Does anyone pay attention to the lesbian nigger. The one that lets blacks kill each other every weekend. I think she should walk through that area on the weekend, without her body guards!

How in the world did this ‘thing’ ever get elected?

Lori Lightbrain needs to Shut the Hell Up and go lick some Kitty !
She is an imbecile and has no idea how to run a City !