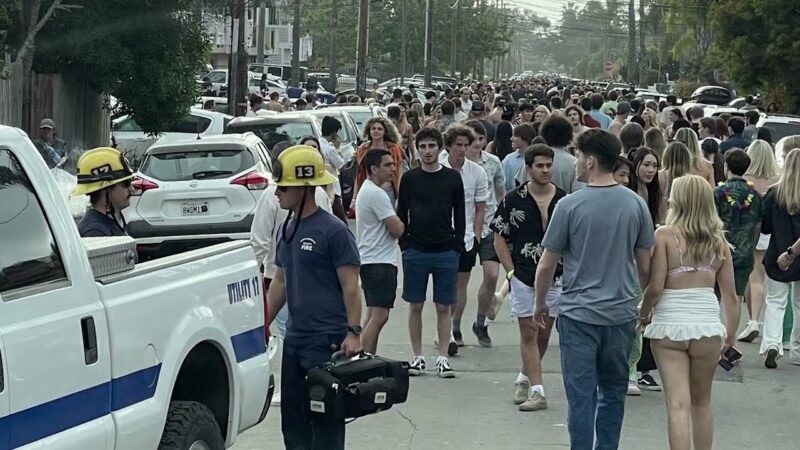 First responders in Santa Barbara said they have been “overwhelmed with medical calls” as Spring break chaos hit the west.

Santa Barbara police said that Deltopia celebrations got out of hand on Saturday evening and Santa Barbara County Fire declared a ‘multi-casualty incident’ in Isla Vista due to what was described as ‘multiple severe traumas and medical emergencies.’

At 1:15 p.m., emergency personnel was sent to Del Playa Drive after a woman had fallen from a room.

Paramedics were also called after someone fell from a second-story window on El Nido Lane.

First responders treated people with major injuries that included broken bones as well as people who had overdosed on drugs and alcohol.

Firefighters declared the event a ‘mass casualty incident’ due to the number of patients with medical emergencies thus allowing them to implement a triage system so the most serious cases were given priority for medical emergencies.

Problems with excessive partying have persisted for decades in Santa Barbara but the recent chaos and violence have politicians, university officials, police and student leaders calling for more prudent partying.

Deltopia evolved from Floatopia, which started in 2004 and included the beach, however, It has been banned since 2009 after it was deemed an environmental and safety hazard because of trash, human waste and near-drownings.

Since then, beaches are closed that weekend, and the party migrated a block inland to Del Playa Drive.

With social media spreading the word, the party has only grown in size.