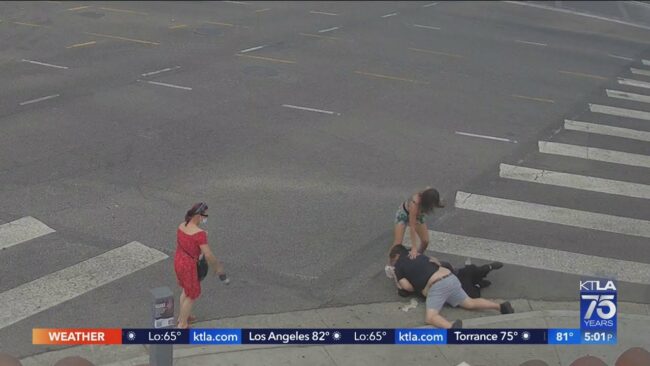 A California restaurant owner chased down and tackled a suspect who had just sucker punched and robbed an elderly man.

Video footage taken earlier this month shows an elderly man sitting at a table outside Rafallo’s Pizza at the intersection of La Brea and Hollywood when the suspect punched him in the face and stole his phone and wallet. The restaurant owner Tim Ratcliff chased after the suspect and eventually tackled him on the street.

The restaurant owner said members of the Los Angeles Police Department (LAPD) are fed up with the spike in crime.

“Even one of the officers and I talked about it … they’re tired of it … a lot of people like myself are tired of this type of thing happening,” Ratcliff said.

Los Angeles City Councilman Mitch O’Farrell introduced, on the same day of the attack, a proposal to transfer $216,000 from his office to the LAPD to address the rise in crime by putting more officers out on the streets.