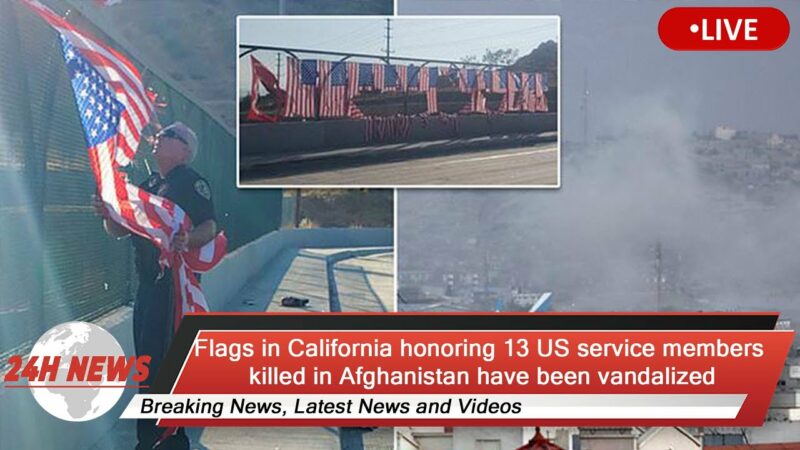 An ISIS-K terrorist attack at Kabul International Airport last month claimed the lives of 13 U.S. service members, according to authorities. A memorial to those 13 military members has been destroyed.

The American flags of the thirteen victims of the attack, each representing one of the victims, were put atop a freeway bridge near Riverside, California, in honor of the victims. A Marine Corps flag was flown over the bridge as well. However, according to local authorities, the memorial was defaced on Labor Day weekend.

Riverside Police confirmed on Tuesday that they were investigating the vandalism through their Facebook page. It appears that pieces of several of the flags have been slashed or ripped in photos of the flags that have been taken.

“Recently after the deaths of our 13 United States Service Members killed in Afghanistan, 13 American Flags and 1 Marine Corp flag were placed on the fence to the Ivy Street overpass to the 91 Freeway in Riverside as a memorial. Sometime yesterday, an observant citizen noticed the flags appeared to be damaged and it was reported to the police,” Riverside Police wrote.

They added, “At this point, we don’t have any suspect description but it’s obvious the flags were intentionally damaged.”

The group “What is Going on in Riverside County” was also thanked by the Riverside Police Department for alerting them to the damage. They stated that the damaged flags will be removed and passed over to a local Boy Scout unit for proper management and retirement.

The memorial was dedicated to three Marines from Southern California: Kareem Nikoui, 20, Dylan Merola, 20, and Hunter Lopez, 22, who are from Southern California. The attack, which took place in the closing days of the United States’ exit from Afghanistan, also claimed the lives of ten other service members from across the nation.

“I want to say it’s insane, it really is. I mean who would do that? I mean it represents something to all of us, but more importantly to the families of these thirteen,” Riverside Officer Ryan Railsback told KTLA on the vandalism to the flags.

“It broke my heart, not only for me, but for their family, for their country that they died serving and protecting for us to have our freedom,” said Steve Johnson, who reportedly helped remove the damaged flags.