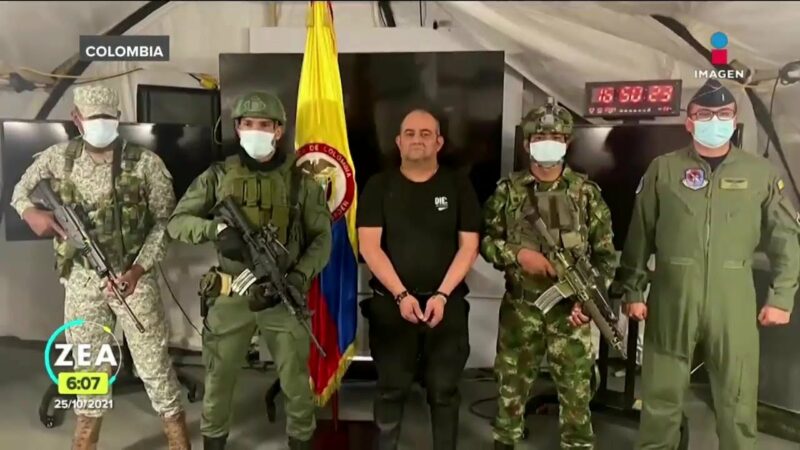 BREAKING NEWS! Country’s Most Wanted Drug Kingpin To Be Extradited To U.S.

The most wanted drug trafficker in Colombia was taken into custody Saturday during a raid and will be extradited to the U.S.

Colombia announced Dairo Antonio Úsuga, leader of the country’s largest criminal gang, had been arrested in a joint army, air force, and police operation. Known as Otoniel, Usuga has been on the U.S. Drug Enforcement Administration’s most-wanted list for years. There was a $5 million bounty on his head at the time of his arrest.

Otoniel allegedly imported an estimated 73 metric tons of cocaine into the U.S. between 2003 and 2014, He was indicted in the U.S. in 2009 and will face charges of drug trafficking, killing police officers, and enlisting children.

The Autodefensas Gaitanistas de Colombia also known as the Gulf Clan gang is believed to have some 1,800 members and often recruits from far-right paramilitary groups. Members of the gang have been arrested in Argentina, Brazil, Honduras, Peru, and Spain, the group controls drug smuggling routes as far away as Russia.

“In South America, there is no larger cocaine trafficker,” Toby Muse, author of “Kilo: Inside the Cocaine Cartels,” said. “We are living in the golden age of cocaine, we are producing more cocaine than ever – that’s a fact.”

The drug kingpin was taken by authorities in his rural home in the northwest region of Colombia near its border with Panama. Otoniel had a network of safe houses in rural areas and relied on couriers for communication, rather than phones.

Otoniel was cautious about being in “inhabited areas” out of fear of being caught, police chief Jorge Vargas said. Otoniel’s location was traced by more than 50 signal intelligence experts using satellite imagery, according to Vargas.

The United States and the United Kingdom worked together in the search; there were 500 soldiers and 22 helicopters involved in the raid, with one police officer dying.

Otoniel was a part of several guerrilla and paramilitary groups before he started to work for drug lord Daniel Rendón Herrera in 2005. Herrera headed the gang until Otoniel took over.